Davitts Bord Na nOg are having a medal presentation for our successful U-12,...

A big thank you to Dr. Catherine Sweeney for her sponsorship. Catherine is...

The latest Presto results for the 19th January 2020.

The latest Presto results for the 12th January 2020.

Davitts GAA Club
Best of luck to the Mayo Seniors who begin their defence of the National Football League against Donegal in Ballybofey at 7.15pm on Saturday, especially our own great warrior Colm Boyle. This is the team that was announced:

Good luck also to Dmitry Trench, Michael Conroy and Kieran Kilkenny with the Mayo U-20's in the Leo Murphy final at 2pm on Saturday, against Louth in Carrick On Shannon and Daniel Huane with the Mayo Hurlers who play Kerry in the first round of the National Hurling League in Castlebar at 2pm on Saturday....
37    View on Facebook

Davitts GAA Club
Davitts Bord Na nOg are having a medal presentation for our successful U-12, U-14, U-16 and Minor squads on Sunday February 2nd at 5pm in the Clubhouse. Medals will be presented by Mayo Footballers Keith Higgins and Colm Boyle....
17    View on Facebook

Davitts GAA Club
Mayo begin the defence of their Allianz league title against Donegal on Saturday night.
The best of luck to Colm and the lads. The team named is as follows:

Davitts GAA Club
This week's Presto Result. The Jackpot was not won so it rises to €7,900 for next Sunday night's draw in Keane's, Crossboyne.
To play online click on the following link:
#Anchor" target="_blank">https://play.clubforce.com/play_newa.asp?ll_id=120#Anchor

Davitts GAA Club
A big thank you to Dr. Catherine Sweeney for her sponsorship. Catherine is pictured presenting a cheque to Davitts officers Liam Nyland, Michael Waldron and John A Noone...
3 3    View on Facebook

Davitts GAA Club
Well done to the Davitts lads, each of whom played superbly in the County Cup finals in Bekan this morning.
Tomas Ronayne excelled in the South & East team that defeated North & West in the Plate final.
Joe Prendergast, Fionnan Gallagher, Fenton Kelly and Jack Devane were very impressive in South Mayo's victory over West Mayo in the Shield final...
47 3    View on Facebook

This week's Presto Result. The jackpot rises to €7,000 for next Sunday night's draw in The Borderline, Ballindine.
To play online click on the following link:
https://t.co/gCCQ1JUN34 https://t.co/yi0uTVbhwQ
View on Twitter 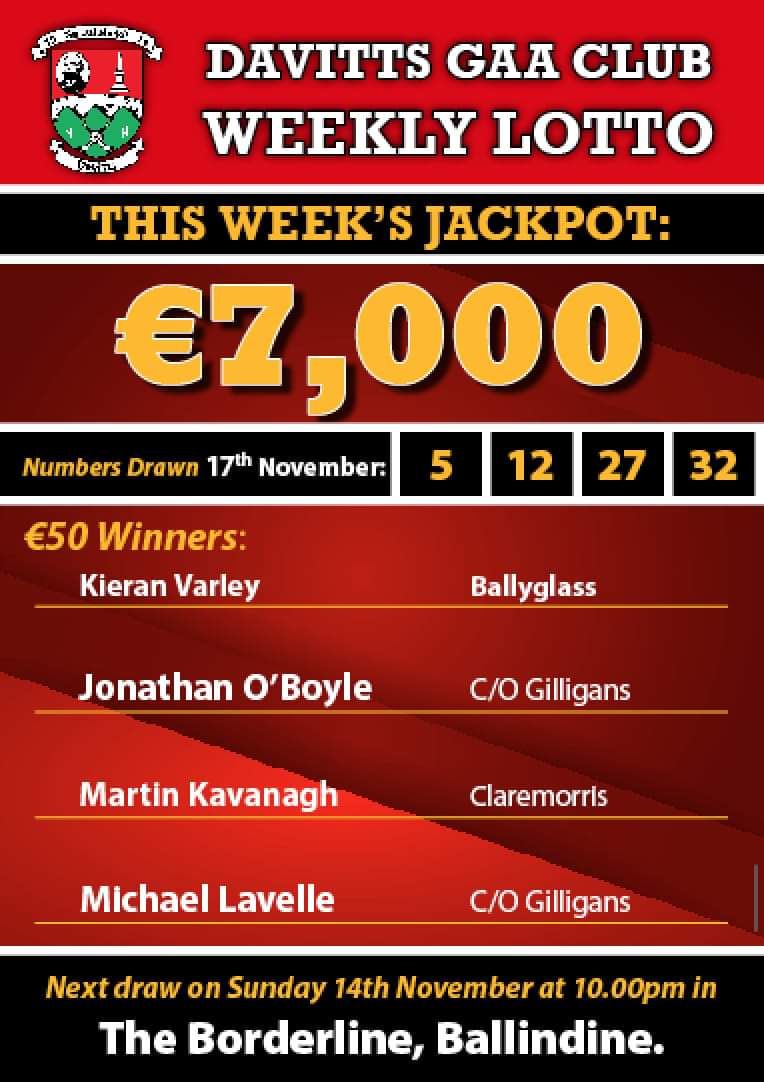 This week's Presto Result. One player matched three numbers but the Jackpot was not won. There will be a Jackpot of €6,900 in next Sunday night's draw in The Shamrock Bar, Claremorris.
To play online click on the following link:
https://t.co/gCCQ1JUN34 https://t.co/SEYfICHNxt
View on Twitter 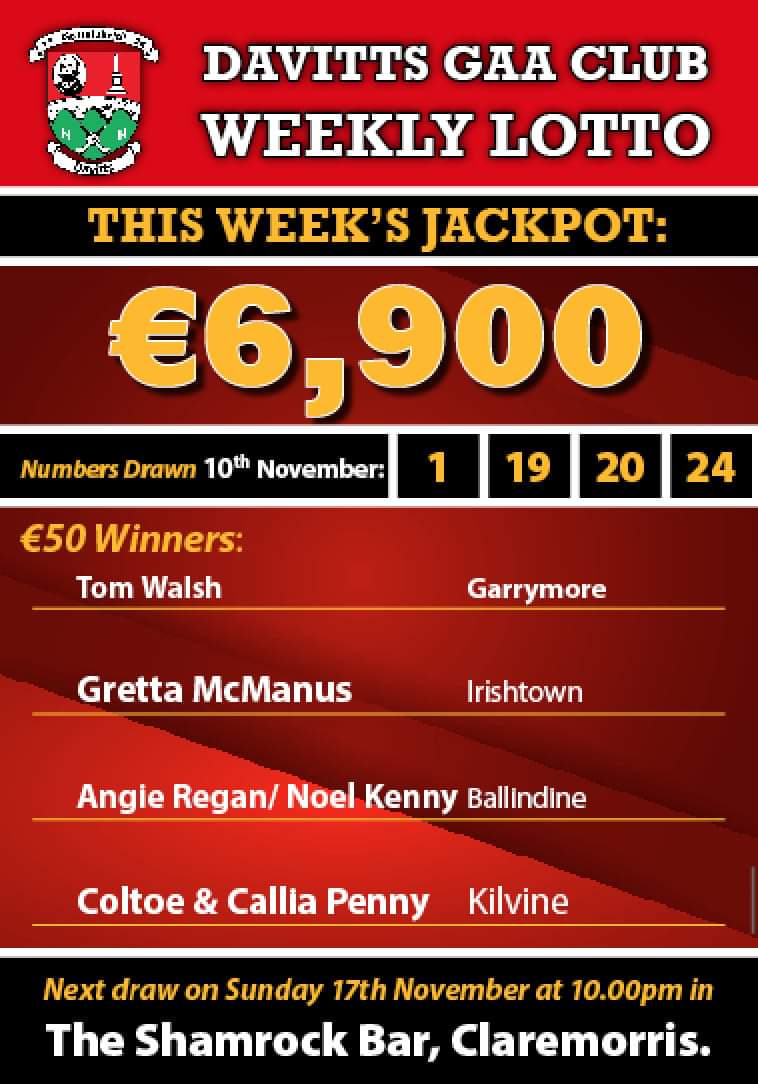 Davitts Bord na Nóg and LGFA will hold a fundraising Table Quiz on Friday 15th of November at 8pm in Bourkes of Irishtown. Table of 4 €40, DJ and Raffle Prizes on the night https://t.co/3uObFWkKfS
View on Twitter 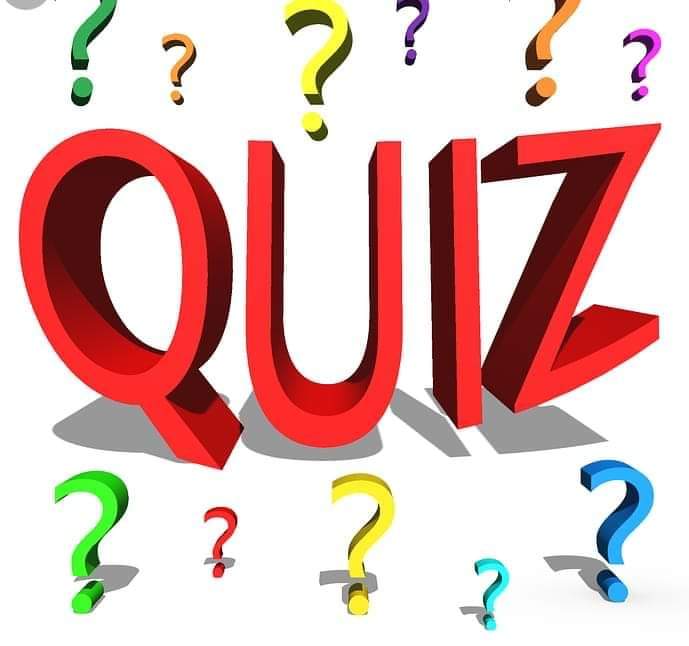 This week's Presto Result. The Jackpot was not won so it rises to €6,800 for next Sunday night's draw in Jackie's, Ballindine.
To play online click on the following link:
https://t.co/gCCQ1JUN34 https://t.co/E9A9yKxLKX
View on Twitter 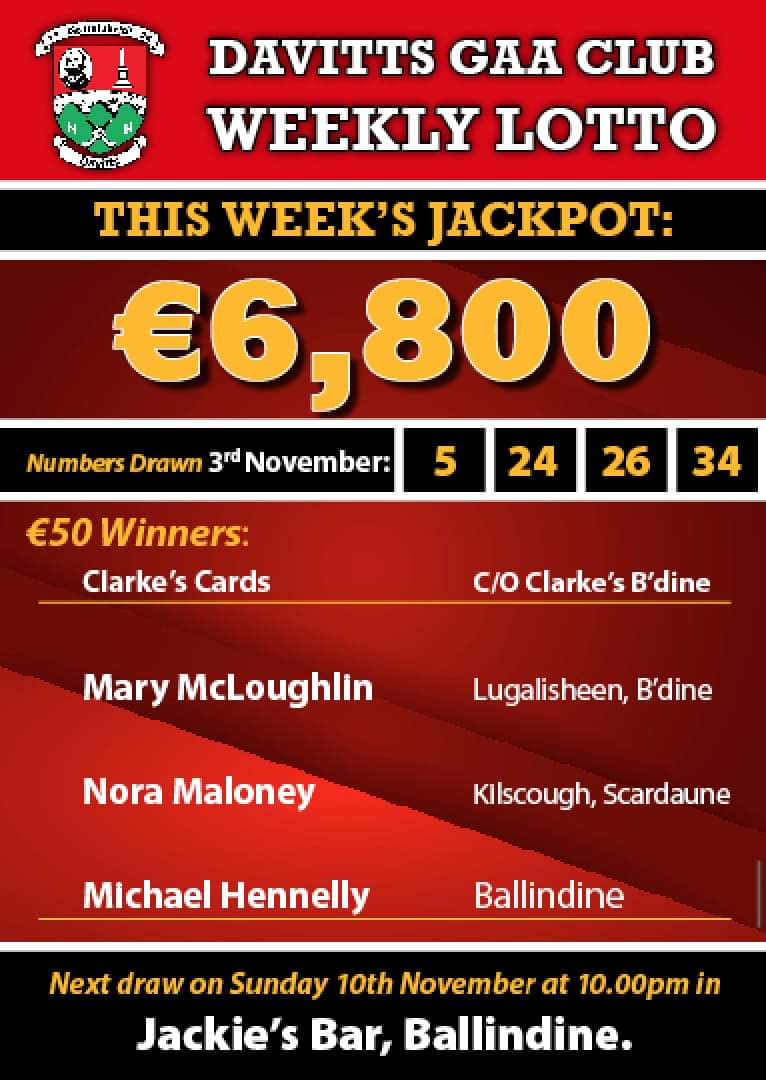 Best of luck to @colmboyle and all the Mayo lads at this evenings @PwC 2019 All Star Awards in Dublin https://t.co/bHtonoikNs
View on Twitter 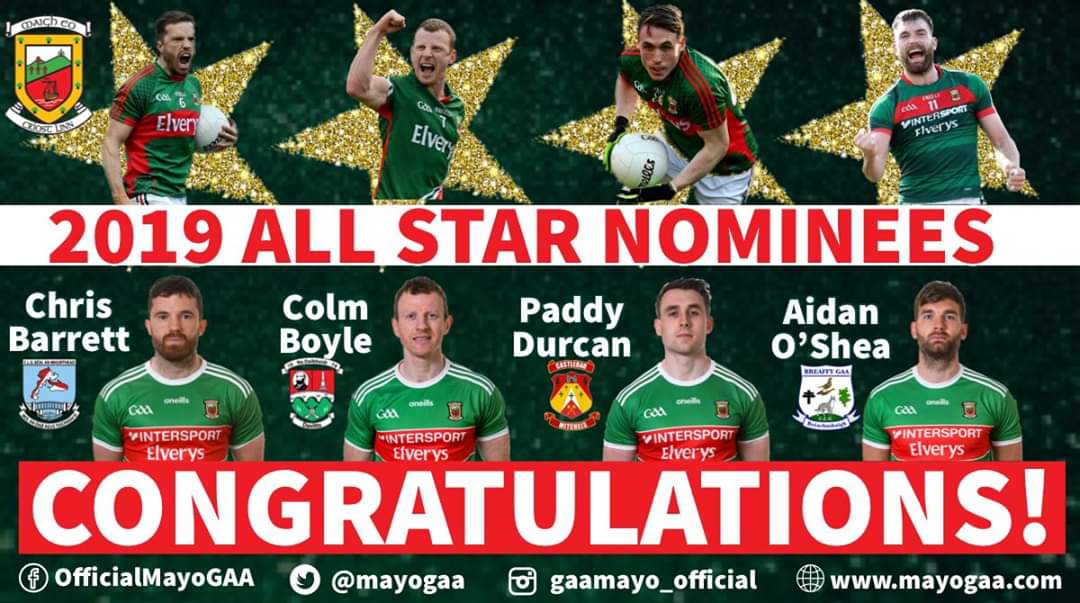