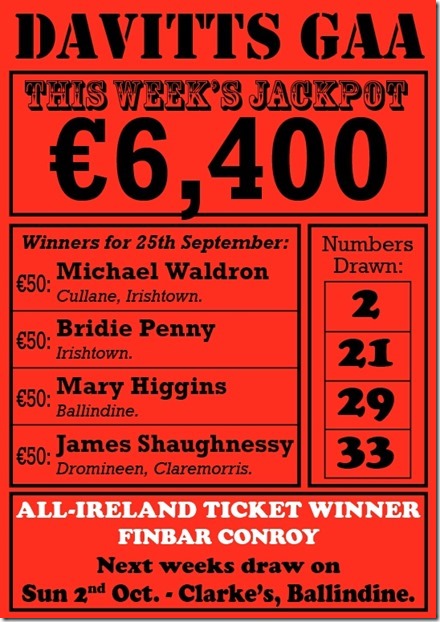 Davitts hosted Ardnaree in Ballindine on Saturday evening and collected the two Senior League Division 1B points on offer with a reasonably comfortable eight point victory in atrocious conditions.

Davitts, wind assisted in the first half, were leading by 1-10 to 0-2 after the opening twenty minutes after scores from Evan Ronayne (1-4), Liam Kearns (0-2), Ronan McNamara (0-2), Keith Prendergast (0-1), Andrew Peters (0-1) and Paul Carey (0-1) with John Timlin and Eoin McCormack pointing for the visitors.

The last ten minutes of the first half however saw Ardnaree hit a purple patch with John Timlin goaling in the 23rd minute, wing back Adam McGinty goaling in the 27th minute and John Timlin and Eoin McCormack adding points to leave just three points between the sides before Ronan McNamara pointed for Davitts to leave them ahead by 1-11 to 2-4 at the break.

Davitts started the second half well and two fouls on Michael Conroy were both punished by Cathal Hennelly, two second half subs. Paul Carey added another point in the 10th minute before Davitts goalie Adrian McNamara pulled off a great save from an Eoin McCormack penalty a minute later as the Davitts supporters began to relax.

Ronan O Malley pointed for the visitors in the 18th minute but Liam Kearns emphatically slotted home a penalty with five minutes remaining to ensure the Davitts victory. An injury time point from Ardnaree substitute Darragh McCormack was the only remaining score of a game that saw Davitts go back to the top of the Div 1B League Table. 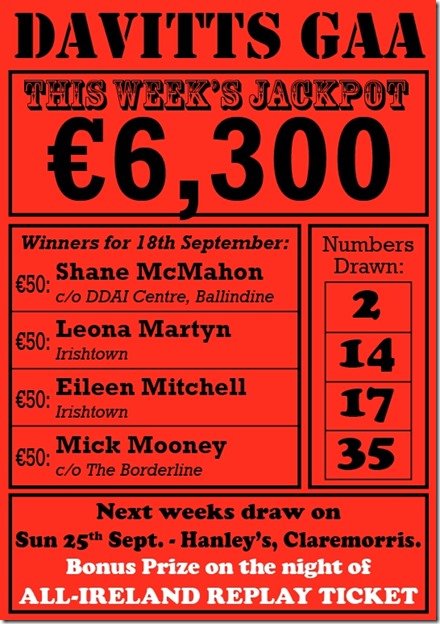 Ticket order deadline for the All-Ireland Final Replay is Friday September 23rd at 9pm.
Davitts Club would like to thank our members for their patience with respect to the distribution of tickets for the drawn game. We will try to satisfy as many members as possible with tickets for the Replay but would again encourage our people to source tickets elsewhere because it will be impossible for us to cater for the demand.

Davitts played Shrule Glencorrib in Division 1D of the Senior League in windy Ballindine on Sunday but had to settle for a share of the spoils. The game ended up 0-10 apiece after a dour encounter.

Davitts, playing against the wind in the first half, played some brilliant football in the opening quarter, and led by 0-5 to 0-1 after eighteen minutes, with Liam Kearns (2), Ronan McNamara, Evan Ronayne and Andrew Peters finding the target. Shrule Glencorrib got a grip around the midfield area and shot six unanswered points to lead by 0-7 to 0-5 at halftime.

The visitors began the second half as they finished the first. They notched the opening score of the half to go three ahead after five minutes. Andy Peters and Liam Kearns narrowed the gap to a single point but Davitts were struggling to find any fluency in their play. Shrule Glencorrib scored two more points but Ronan McNamara, Evan Ronayne and Liam Kearns pointed in the last eight minutes as the sides ended up level.

Davitts advanced to the County Junior B Final after a hard earned victory over Kilmovee Shamrocks in a game played in difficult conditions in Kiltimagh on Saturday evening. The standard of football was not of the highest quality but the commitment level of both sets of players was impressive in this hard hitting encounter.

Davitts led by a point at half time, 0-3 to 0-2, with Mattie Trench, Seamus Roche and Shane Treacy scoring for Davitts and Sean Horan pointing two frees for Kilmovee. Davitts had played with the assistance of the wind in the first half and it was obvious that there would be little to separate the two sides in the finish.

Shane Treacy extended the lead to two points in the 4th minute of the second half but two more Sean Horan points had the sides level 0-4 each with fifteen minutes remaining. Sean and James Horan for Kilmovee and Seamus Roche and Mattie Trench for Davitts pointed before a Sean Horan free had Kilmovee a point ahead with five minutes to go.

A minute later Davitts got the game’s crucial score when Paul Carey’s long delivery was flicked on by Sean Waldron to Shane Treacy who buried his shot past Brendan Horan. Sean Horan narrowed the gap to a point before Sean Waldron added a long range free before the finish as Davitts defended their two point lead well in the closing minutes.

Davitts will know that they will have to play much better in the final against a fancied Knockmore outfit but will be happy to have come out on top in this exciting Semi Final.

Davitts U-15’s hosted a strong Ballintubber side in the County League on Sunday morning and were beaten by 5-11 to 1-6.

Ballintubber led by 2-4 to 1-2 at the break with the impressive Niall Treacy getting the Davitts scores. The scoreline could in fact have been much worse but for the excellent goalkeeping of Gavin Ring, who produced a series of top class saves throughout the game.

Davitts tried hard to get into the game but three Stephen Nyland points and one from Jack Trench was all they could score as Ballintubber pulled away in the final quarter.

On Sunday the Minors got their County C Championship campaign off to a winning start with a fine 1-18 to 2-8 victory over Crossmolina in Ballindine. A strong first half showing which yielded fourteen points was the key to this victory as Davitts led by 0-14 to 0-5 at the break. Davitts were on top in most sectors throughout that first half but Crossmolina fought back bravely in the second period to narrow the deficit to five points at one stage but a fine goal finished by Jack Ronayne put an end to their challenge.

All of the players played well in this game with Kieran Fahy, Keelan Cosgrove, Aidan Macken, Jack Ronayne, Daniel Huane, Evan Ronayne and Ryan McLoughlin in top form all through the game.

Davitts Minor Team were defeated by Hollymount Carramore in the South Minor B Semi Final on Friday evening in Ballindine. The visitor’s ability to strike for crucial goals proved to be the difference between the sides.

HollyCarra led by 1-6 to 0-7 at half time but they added two early second half goals to rock the homeside. Kieran Fahy, Keelan Cosgrove, John Kilkenny, Daniel Huane, Jack Ronayne and Evan Ronayne tried their best but on this occasion Hollymount Carramore had all the answers.