The Davitts GAA Club AGM will take place on Sunday November 27th at 6pm in the New Clubhouse. Motions and nominations to be given to Secretary Ronan Kirrane by November 13th. Anybody that has an interest in the Club should attend and we would be delighted to welcome new people to the meeting. 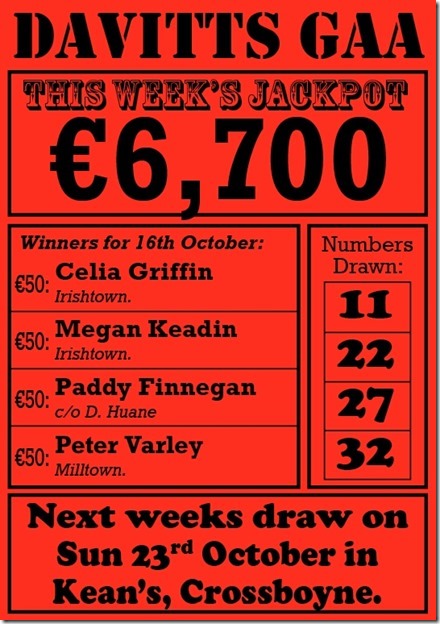 Davitts bowed out of this year’s Mayo Senior Championship having been beaten by Breaffy in Ballindine on Saturday evening coupled with Garrymore’s late draw with Claremorris. The results see Breaffy and Garrymore advance to the Quarter Final with Claremorris facing a relegation playoff.

Cathal Hennelly, who impressed greatly throughout, opened the scoring but two points from man of the match Liam Irwin put the visitors ahead. Liam Kearns and Keith Prendergast both pointed to give Davitts the lead again but Irwin equalized in the 16th minute and Kevin Curry goaled two minutes later as Breaffy began to dominate. Points from Curry, Irwin and Conor O Shea put the visitors six up before Ronan McNamara pointed for Davitts to leave the homeside trailing by 1-6 to 0-4 at the break.

Davitts introduced Michael Conroy at the restart as they took the game to Breaffy. Liam Kearns landed a beauty with Liam Irwin replying for Breaffy. Cathal Hennelly narrowed the gap to four points before Robbie Hennelly pulled off a fantastic save from a Ronan McNamara piledriver. Cathal Hennelly shot another Davitts point to leave three points between the sides. In the 47th minute Davitts were denied what looked like a clearcut penalty when McNamara was fouled bearing down on goal but referee Liam Devenney amazingly waved play on. Breaffy broke down the field and goaled themselves via Peter Dravins to kill off Davitts. They added points from Aidan O Shea, Liam Irwin and Robert Fadden before the finish while Liam Kearns (2), Michael Conroy and Ronan McNamara replying for the hosts before the finish. 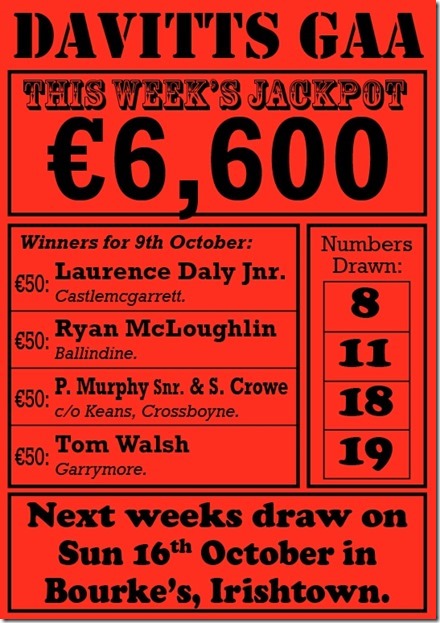 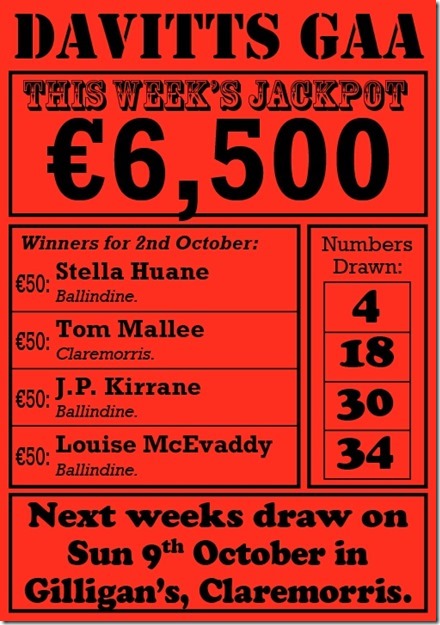 Davitts and Knockmore met in the Final of the County Junior B Championship in Bekan on Friday evening with Knockmore coming out on top by 3-9 to 2-9, after a great battle.

Davitts started off the brighter, and led by 1-2 to 0-1 after ten minutes, Mattie Trench and Liam Noone getting the points and Mattie Trench flicking home the goal after a fine Paul Carey pass. The goal seemed to spark Knockmore into life. They fired over a point and goaled soon after to level the game. Davitts points from Liam Noone (2) and Paul Carey put them three ahead again but Knockmore finished the half in style with three points and a crucial goal just before the break, to lead by 2-5 to 1-5 at the interval.

Davitts introduced Gerald Griffin at the start of the second half and one sensed that it might not be their day when he had to retire with a face injury in the first minute of the half. Knockmore extended their lead with the opening point of the half before a sweeping move involving several players saw Davitts create an excellent goal chance for Shane Treacy who couldn’t believe his bad luck when his piledriver came crashing off the crossbar and was cleared to safety by a relieved Knockmore defense.

The two sides traded points in the next fifteen minutes with Seamus Roche and Liam Noone (2) getting the Davitts scores. Knockmore goaled again in the 52nd minute but Paul Carey spectacularly lobbed a classy goal in injury time to narrow the gap to a goal. Davitts threw everything at Knockmore in the final two minutes but their defense held firm and they deservedly claimed the title.

Credit to both sets of players for their tremendous effort over the hour with the exchanges tough but fair throughout.