U-21’s in County B Semi Final this Wednesday

Davitts meet Ballinrobe in Hollymount (note the change of venue) on Wednesday evening, September 1st, in the County U-21 B semi-final, at 6.30pm. A big support would be of great benefit to this team who are unbeaten so far this year.

Anyone who travelled to Claremorris for this Intermediate Championship quarter-final, in the hope of seeing a tough hard match between two old rivals, were not disappointed as Kiltimagh edged Davitts by a single point in a very exciting tie. Davitts started in whirlwind fashion and raced into a five point lead after 9 minutes with scores from Michael Conroy, two from Aidan McTigue and two monsters from Ronan McNamara. Kiltimagh replied via Ciaran Charlton and David Lydon but Davitts added two further scores from David McDonagh and Paul Carey to restore their five point lead going into injury time. Charlton and the impressive Brian Gallagher pointed in the 5th and 6th minutes of added on time to leave Davitts ahead 0-7 to 0-4 at the interval.

A minor incident as the teams left the field resulted in Davitts midfielder Paul Carey receiving a second yellow card before the start of the second half, and this proved to be the games turning point. Points from Charlton (2) and Gallagher narrowed the gap to a single point ten minutes into the second half but Davitts showed tremendous spirit to extend their lead with points from David McDonagh and Fergal McGrath. Kiltimagh then began to make their numerical advantage tell resulting in excellent points from Gallagher (2), sub Tom Keegan and Noel Lydon to go three up but again Davitts responded via Keith Glynn and a superb Jonathon Clarke point to leave just one between them as time ran out.

Davitts were on top at this stage and most people agreed that a draw would have been a fair outcome but Kiltimagh will not be complaining. They held on in those dramatic final moments and will be tough opponents in the semi-final. They had star performers in Ciaran Charlton, Conor Heneghan, Thomas Morley, the Lydon brothers David, Liam and Noel, John McNicholas and the elusive Brian Gallagher. Davitts best players were Jonathon Clarke and Colm Boyle (both magnificent in the second half), Ronan McNamara, Pat Coyne, Fergal McGrath, Aidan McTigue and sub Keith Glynn.

Davitts U-14 team continued the clubs great winning run in all grades, with a comprehensive 7-18 to 3-7 victory over Mayo Gaels, in Mayo Abbey on Wednesday evening, in the South Mayo B championship semi-final. Davitts dominated the game throughout with outstanding individual displays throughout the field.

Davitts minor team defeated Carras in the South Mayo B Championship semi-final on Tuesday evening in Hollymount, on a 2-10 to 2-7 scoreline. There was nothing between the two teams, and only for the inability of the Carras attack to capitalise on their numerous chances, the result could have been different. The Davitts team however, showed tremendous resilience after seeing their half time lead of 1-6 to 0-1, whittled away with ten minutes remaining, but a classy point by Tommy Waldron, a superb goal by the excellent Josh Ronayne and an unbelievable goal line block by Davitts impressive corner back Gerard McWalter, ensured Davitts passage to the final.

Davitts will know that this type of performance will not be good enough to win the South final but will take great encouragement by the tremendous battling qualities displayed in the second half, when it looked like the game was slipping away. Every player played their part in this great win, but the performances of Donie Ronayne, Gerard McWalter, Mark Ronayne, Josh Ronayne, Darren Connolly, Tommy Waldron and man of the match Jason Connolly deserve special mention.

This week’s upcoming games – get out and show your support for the boys in black!

The football season is getting serious now and the coming week is a huge one for Davitts GAA Club. On Monday (Aug 23rd) the U-13 team launch their league bid with an away game in Tourmakeady at 7pm.

On Tuesday the minor team face Carras (Garrymore and Kilmaine amalgamated) in the South Mayo B semi-final in Hollymount at 6.20pm.

On the following evening the U-14 team take centre stage in the South Mayo B semi-final in Mayo Abbey against Mayo Gaels.

On Saturday evening, Claremorris is the venue for the County Intermediate quarter final against our old rivals Kiltimagh, at 5pm. A tight and tough game is guaranteed here and a big support would be of great benefit to the team, who appear to be hitting top form at the right time. We would encourage all our supporters to watch this game from the stand (Knock Road entrance) to generate an atmosphere that the boys deserve for such an important game.

Davitts defeated Kiltane, 1-18 to 3-8, in an entertaining Senior League Div 1B game played in ideal conditions in Ballindine on Saturday evening. Kiltane opened well and led by 0-4 to 0-1 after 12 minutes but the homeside hit a purple patch with Paul Carey (1-2), Michael Conroy (0-3), and Aidan McTigue (0-2) hitting the target in the next 12 minutes, although defencive lapses let Kiltane in for a late goal and point before half time to leave it 1-10 to 2-5 to the homeside at the interval. Davitts were well in control of things in the second half with Ronan McNamara keeping the scoreboard ticking over with some excellent long range freetaking and Michael Conroy and Aidan McTigue looking very lively in an impressive attack. Davitts will have to improve considerably if they are to have any chance of beating Kiltimagh in the Intermediate Championship quarter final in Claremorris next Saturday evening (5pm) but the form of Colm Boyle, Johnno Clarke, James Cummins, Ronan McNamara, Paul Carey, Pat Coyne, Colm Roche, Michael Conroy and Aidan McTigue (back to his best in this game) is encouraging.

Davitts captured the Brennan Cup (South Mayo U-21Championship) in dramatic fashion on Tuesday evening defeating St. Gerards by 3-5 to 1-10, a most unlikely result, as St. Gerards dominated proceedings for most of the evening, but Davitts showed their never say die character in the last six minutes of this game, to emerge victorious when defeat seemed inevitable. St. Gerards will wonder how they possibly managed to let this game slip from their grasp as they led by 1-10 to 1-3 with time running out, but this bunch of Davitts players showed unbelievable bottle, epitomised by Michael Waldron, Mark Ronayne, Keith Prendergast (magnificient in the closing minutes of the game), Liam Kearns, Fergal McGrath and Darren Connolly, to grab the unlikeliest of victories.

A tremendous point by inspirational centre half back Jonathon Clarke, after excellent work by Mark Ronayne, began the Davitts fightback, and two superb goals by Fergal McGrath and Darren Connolly left the sides level with time running out. Keith Prendergast clinched victory for Davitts with an outstanding winning point as the game ticked into injury time. Davitts will know that this type of performance will not be good enough to beat Ballinrobe in the county semi-final, but one would have to be impressed by the spirit that this panel of players possess.

We wish the best of luck to St. Gerards in their county semi-final against Castlebar Mitchells. As well as those mentioned Davitts had superb performances from Paddy Kirrane, Kevin Gallagher (a definite man of the match contender), Laurence Daly and team captain Shane Mitchell. 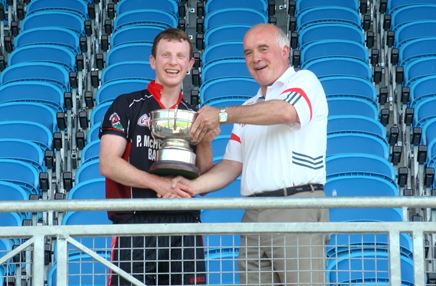 Davitts defeated Belmullet in the final of the Michael Walsh Intermediate League in sunny McHale Park on Sunday. The final scoreline was 1-12 to 1-7 but in all fairness Davitts won this game very comfortably and a much greater winning margin would not have flattered them. The powerful Ronan McNamara and Keith Glynn lorded midfield for most of the game and the Davitts defence were very impressive led on by their inspirational captain Colm Boyle (is there a better wing back in Mayo?). Early points by Pat Coyne, Fergal McGrath and Michael Conroy (2) had Davitts on their way and when Boyle buried an excellent goal after great work by Colm Roche, Conroy and Coyne the writing was on the wall for Belmullet although three late points narrowed the lead to a goal at the break, 1-4 to 0-4. Davitts continued to dominate in the second half and even a lucky Belmullet goal with 15 minutes remaining was not going to deny the men from Ballindine and Irishtown, who finished with points from Boyle, Conroy, Aidan McTigue and David McDonagh.

Ballyhaunis played Davitts on Friday evening in a senior league Div 1F tie in Ballindine, and were defeated,

0-16 to 0-7, by a slick home side, under the watchful eye of manager John A Noone. Davitts dominated from the start with Pat Coyne and Michael Waldron (the master and his young apprentice!) in control at midfield, providing plenty of quality ball to the eager forwardline where Colm Roche and Con Penny were on fire, scoring at will and getting great support from impressive wing back Kieran Mooney.

Davitts led by 0-11 to 0-3 at half time with Roche (5), Coyne, Kevin Daly, Penny (2) and Mooney (2) the scorers. In defence, JP Kirrane, Martin Cosgrove and Michael Ronayne also impressed, defending well and proving the springboard for several attacks. Ballyhaunis battled bravely throughout the second half but the result was never in doubt with Penny adding on a further three points and supersub Kevin Connolly justifying his late introduction with two superb long range scores that would not be out of place on a much bigger stage.

Davitts are involved in two big games in the coming week so get your diaries out and take note. On Sunday (Aug 15th) the first team take on old rivals Belmullet in the Michael Walsh Intermediate league final in McHale Park, Castlebar at 2pm. Belmullet knocked Davitts out of the Intermediate Championship last year (after 3 epic games) and defeated us by a point in this years Senior League game so Sunday would be an ideal opportunity to set the record straight.

On Tuesday (Aug 17th) the U-21 team make the short trip to Garrymore to play St. Gerards in the Brennan Cup Final (South Mayo U-21 Championship). Davitts are fresh from their victory over Belmullet in the County B quarter-final but St. Gerards are also in flying form, having qualified for the County A semi-final.

A big support would be greatly appreciated for these two games.