Thanks to all who have paid their membership for 2014. The list of people / families who have purchased Mayo €100 tickets or Adult Membership as of 27-May-2014 can be found here. The first €100 Mayo ticket draw will take place tonight, therefore membership cannot be offered via these tickets any longer.

Adult Membership can still be secured at the price of €50 for a limited time.

As previously stated, all players and team managers must be members to represent our club. Any players or team officials that have not paid their membership will be contacted directly.

Note: This list does not include juvenile membership paid to Bord ná n-Óg officers. Due to our child protection policy and sports guidelines Davitts GAA will only publish names of members over the age of 18.

Ballaghaderreen defeated Davitts by five points in this Mayo Senior Championship tie played in Ballaghaderreen on Saturday evening. The exchanges were close throughout but a Ballagh goal scored by Cormac Doohan in the 27th minute was the game’s crucial score. Ballagh had three other clearcut goal chances in the first half but excellent goalkeeping by Adrian McNamara kept them out.

Andy Moran got the opening two points in the 5th and 6th minutes as he threatened to run riot in the full forward line. The impressive Ronan McNamara pointed a monster free to open Davitts account and Barry Regan left it 0-3 to 0-1 after ten minutes. Davitts moved centre back Colm Boyle back to mark Andy Moran and the two county men had a great battle with Boyle coming out on top for the remainder of the game.

McNamara and Rory Conway swapped scores before Davitts Michael Conroy got his first score in the 21st minute and the same player equalised three minutes later with a superb point after a run from deep. Barry Regan restored the homeside’s lead a minute later and then Doohan’s goal put daylight between the sides. McNamara and Fearghal McGrath for Davitts and Regan for Ballagh pointed before halftime to leave Ballaghaderreen ahead by 1-6 to 0-6 at the break.

Darragh Dunne for the homeside and Josh Ronayne for Davitts shot early second half points and the big Davitts crowd got a massive lift in the 6th minute when Andrew Peters goaled after Ballagh goalie Ollie Flanagan parried a Josh Ronayne effort. Referee Denis Harrington disallowed the goal for a square ball infringement, which infuriated the visitors, and Barry Regan shot two points in rapid succession to put his side five points ahead.

Davitts tried hard but could not breach the Ballagh defence for the goal they needed and points from Thomas Waldron, Keith Prendergast and Ronan McNamara for Davitts were cancelled out by scores from James Kilcullen, Darragh Dunne and Barry Regan.

Davitts Junior team made the journey to Crossmolina on Sunday and won their second game in Div 1D with a fine 2-9 to 0-11 victory over the Deel Rovers. Wind assisted Davitts led by 0-6 to 0-4 at halftime with the superb Aidan McTigue helping himself to five of those points and Matthew Trench scoring the other.

Those present that thought that a two points halftime lead might not be enough for Davitts looked like they might be right as the homeside scored three early second half scores to take the lead for the first time in the match. The young Davitts team had other ideas however and another Aidan McTigue point was closely followed by two opportunist goals by Liam Noone to give Davitts a six point lead midway through the half.

Crossmolina chipped away at the lead but Davitts fought bravely and two points from McTigue and Michael Waldron before the finish ensured a well earned four point victory.

Michael Mangan was solid in goals for Davitts, with his brother Padraig and Mark and Donal Ronayne excelling in an uncompromising defence, along with Lawrence Daly, Martin Cosgrove and Gerard McWalter. Shane Mitchell and Michael Waldron, ably assisted by Sean Waldron in the second half, controlled the midfield sector. All six forwards combined well with Aidan McTigue and Liam Noone grabbing the scores but Seamus Roche, Darren Connolly and the hard working Matthew Trench all impressed.

In Support of Patient Comfort Fund, St Joseph’s Oncology Ward, UHG, where local man Martin Kelly received excellent care while being treated for leukaemia recently. Cancer affects so many families and these services are vital, all support greatly appreciated.

A race with a twist – Guess your own time -The last can be first! All participants will predict their race time in advance. The winner will be determined by those whose time is closest to their predicted time. No watches or headphones allowed.

The Galway Bay hotel is sponsoring an excellent prize of one night stay for two, when registering online. Walkers can pre enter at Ballindine Post office or contact David (087-9272242), and will be entered into above draw. Entry Fee €15 – Please enter online to prevent delays, on www.runireland.com.

Crossmolina defeated Davitts in the second round of the Senior League Div 1A played in difficult conditions in Crossmolina on Saturday evening. Davitts, wind assisted in the first half, failed to gain advantage by playing a strangely defensive type of game, and the sides went in level at 0-3 apiece at halftime.

Seamus Roche opened the scoring in the first minute for Davitts before points from the mercurial Ciaran McDonald and Kevin Mulhern gave the hosts the lead. Josh Ronayne equalised in the tenth minute and Colm Roche put Davitts ahead six minutes later with a fine score. McDonald had the last say in a very poor first half when he pointed in the 25th minute.

The second half began with Brian Benson for Crossmolina and Davitts Michael Conroy trading points in the 4th and 5th minutes. Peadar Gardiner’s seventh minute point was cancelled out by another Conroy score two minutes later. Crossmolina assumed full control of the game from then on and only some superb defending from Davitts Colm Boyle, Kevin Gallagher and Colm Roche kept the scoreline respectable for the visitors.

Points from Benson (2), Fionn Duffy and McDonald (2) for Crossmolina with Davitts replying through Conroy and Matthew Trench completed the scoring in a poor match.

Have you got what it takes to be the next James Horan? If so, why not try the completely free Fantasy Gaelic Football league? You can even pit your wits against other Davitts competitors in a dedicted club competition! Closing date is this Saturday 17th May. For full details follow this link:

Davitts Juniors, like the Seniors the evening before, began their Div 1D campaign with a win over Hollymount Carramore on Sunday in Ballindine. Davitts had built up a 1-7 to 0-3 lead by halftime with the returning Aidan McTigue on fire at corner forward, scoring five of those points. Michael Waldron and Darren Connolly were the other point scorers while Sean Waldron rifled home the game’s only goal.

Davitts continued to impress in the second half with the team displaying a great work ethic. McTigue added four more points with Connolly and Sean Waldron contributing the other two. Hollymount Carramore staged a late revival and kicked the last five points of the game but it was too little too late for their gallant side.

The game aqlso marked the return of Martin Cosgrove after a two year absence through injury and he aquitted himself well.

Davitts and Garrymore fought out a tense and exciting local derby in the opening round of the Senior League Div 1A in Ballindine on Saturday evening with Davitts just about shading the issue by a point.

Garrymore, facing into a stiff wind, opened in whirlwind fashion, racing into a 1-2 to 0-0 lead after just 4 minutes with a goal finished by Myles Fallon and points from Martin Maloney and the impressive Shane Nally. Davitts began to compose themselves, in front of a fine crowd, and points from man of the match Michael Conroy, Ronan McNamara, Josh Ronayne (2) with a response from Caolann Crowe for the visitors left Garrymore ahead by 1-3 to 0-4 midway through the half.

The hugely impressive Conroy and Fearghal McGrath narrowed the gap with two good points and a superb goal from Conroy, after great work from Seamus Roche and Ronan McNamara, put Davitts ahead for the first time in the game in the 21st minute.

Jimmy Killeen pointed a minute later but Josh Ronayne and Michael Conroy exteneded the homeside’s lead before Enda Varley opened his account a minute into injury time to leave Davitts ahead by 1-8 to 1-5 at the break..

Garrymore, the wind at their backs, tried hard to peg the lead back but it was Davitts, adopting a very defensive policy, who opened the second half scoring, after seven minutes through Michael Conroy, converting a free after he was crudely taken down by Alan Reilly, probably a lucky man to stay on the field for this indiscretion. Garrymore began to get a grip around the midfield sector through Shane Nally and Caolann Crowe and Mark Tierney and Enda Varley narrowed the deficit before Seamus Roche scored a spectacular point from an impossible angle to restore a three point lead for the homeside with sixteen minutes remaining.

In the last quarter Garrymore only managed two points, via Enda Varley and David Dolan, with Davitts defending superbly to hold out for a one point win.

Swinford had home advantage in the Minor League Div 3 Semi-Final on Friday evening and defeated Davitts by 4-12 to 1-9. While Swinford were the better team on this occasion, the scoreline flatters them somewhat. The key moment in this game was the black carding of Davitts midfielder Jack Rodgers early in the second half with a point separating the sides.

Swinford, playing against the wind, started brightly and went three points up after five minutes. Davitts responded well with Cathal Hennelly, Evan Ronayne (2) and Richie O Connor pointing before Evan Ronayne’s long range point effort deceived the Swinford goalie and ended up in the net. Swinford, thanks to some very sharp forward play, scored 1-2 themselves to take the lead. Three superb points converted by Gerald Griffin, Cathal Hennelly and Evan Ronayne had Davitts ahead by 1-7 to 1-6 at the break after a well contested first half.

Two early second half points by the homeside were followed by Jack Rodgers dismissal. Within three minutes, Swinford had extended their lead to eight points with another point and two quickfire goals. With weather conditions worsening Davitts fought hard and Cathal Hennelly, now operating at midfield, scored a fine point to lift the siege. Swinford were in the driving seat now and in the last ten minutes they tagged on two more goals as they advanced to the final to meet Ballina. All Davitts could muster in response was a Shane Treacy point.

Bros of Tralee…coming this summer 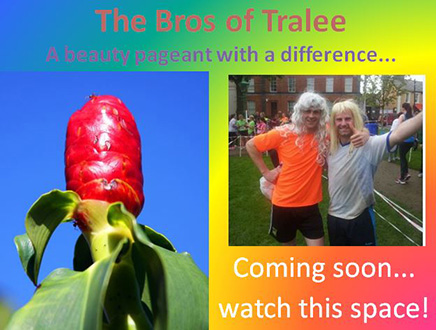