Davitts Juniors had a fine 1-8 to 2-2 victory over Charlestown on Sunday in Division 1D of the Senior League. The game was played in difficult wet conditions in Charlestown and both teams deserve credit for serving up a lively encounter with the sensible refereeing of James Regan also worthy of a mention.

The first half was dominated by both defences and the homeside led by 0-2 to 0-1 at the break having played with the assistance of the wind. Matthew Trench was the Davitts scorer in that half.

Davitts started the second half well with midfielders Declan Healy and William Freeley winning a lot of possession. Two Liam Kearns points put Davitts ahead before wing back Mark Ronayne scored a goal of the season contender in the tenth minute. He flicked the ball up on the run and soloed twice before unleashing an unstoppable shot to the top corner of the Charlestown net. Davitts physio Olive Treacy felt that Mark was going for a point but he rubbished her claims.

Evan Ronayne and Liam Noone pointed to extend Davitts lead to six before Charlestown goaled after a good move. Davitts replied with three more points from Liam Kearns (2) and Evan Ronayne with Charlestown converting a penalty on the stroke of time to complete the scoring.

Shrule-Glencorrib defeated Davitts by 1-10 to 1-6 in Davitts second O Mara Cup match in three days, in Glencorrib on Friday evening. Davitts, missing some key players, played poorly in this game and the homeside were full value for their win.

The sides were level at halftime, 0-4 each, with Josh Ronayne (2), Liam Kearns and Johnno Clarke on target for Davitts. An early second half Shrule-Glencorrib flurry yielding 1-3, with Evan Ronayne supplying Davitts only reply with a lovely point, put the homeside on their way. Although Josh Ronayne goaled from the penalty spot after Ronan McNamara was fouled with ten minutes remaining, it was Shrule-Glencorrib that finished the game stronger to win by four points.

Davitts, unimpressive in the first half, produced a quality second half performance to defeat Kilmaine by 1-15 to 1-11 in an O’Mara Cup tie played in Ballindine on Wednesday evening. A large crowd watched this enjoyable game played at a fast pace from start to finish.

Kilmaine were on top in the first half and the led by 1-6 to 0-5 at the break. Davitts were guilty of some very poor shooting and sloppy passing in that first half and the visitors were full of purpose. Declan Healy, Liam Kearns and Josh Ronayne (3) were Davitts first half scorers.

Davitts upped the ante considerably in the second half. Sean Waldron, up to his retirement with a leg injury, and Ronan McNamara began to dominate the aerial exchanges around the middle of the field and the half forward line of man of the match Declan Healy, Liam Kearns and Matthew Trench got their hands on a lot of ball. The forwardline strung together some fine moves and wing back Colm Roche got on the end of a sweeping move midway through the second half and Davitts never looked back. The homeside shot some fine points via Matthew Trench, Andrew Peters, Cathal Hennelly, Liam Kearns (3), Josh Ronayne (3) and Ronan McNamara to run out convincing winners in the end.

Davitts Junior team recorded a fine 2-19 to 1-8 victory over Ballycastle in Ballindine on Sunday. After an evenly matched first half the home side pulled away in the final quarter with an impressive all round team display.

A fine Shane Treacy goal in the 20th minute and some lovely points from Evan Ronayne (2), Aidan McTigue (2), Liam Noone (2) and Gerald Griffin gave Davitts a three point lead at the interval, 1-7 to 1-4.

Ballycastle started the second half well and had reduced the deficit to a single point when Gerald Griffin struck for a crucial second goal. Davitts introduced five strong subs after this as the Ballycastle challenge petered out. Shane Treacy, Evan Ronayne, Aidan McTigue, Gerald Griffin, Mark Ronayne and Matthew Trench added points as Liam Kearns showed his class firing over six fine points in the final quarter.

Congrats to Mick Doherty of the Borderline Bar, Ballindine, who was a very popular winner of the Davitts Presto Jackpot of €9300 recently. Mick is seen here (2nd from right) being presented with his cheque by Club officials. Included in the picture is Chairman Sir Frank Hyland (well tanned and dapper gent on the left), John A. Noone (Presto Coordinator and Head Groundsman), Club Treasurer Michael "Wally" Waldron (partially hidden by the cheque) and Club Secretary Ronan Kirrane (far right… like a lot of his views). 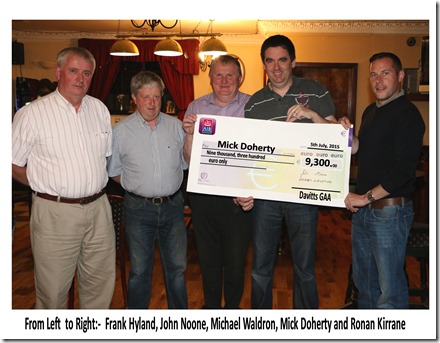 Cathal Hennelly scored a goal for Davitts in the opening seconds of this Senior Div 1A game in Ballindine on Saturday evening to give the homeside the perfect start. Hollymount Carramore dominated the remainder of the match however and their nine point winning margin didn’t flatter them as they played sensible, confident and direct football over the course of the game.

Darren Coen pointed in the ninth minute and the same player hammered home a penalty two minutes later, after Oisin Gill was deemed to be fouled, to give his side the lead. Hollymount Carramore took control throughout the pitch and points from Coen (3), Kevin Feerick and Clifford Connolly before the break with Cathal Hennelly pulling one back on the stroke of halftime left the visitors ahead by 1-6 to 1-1 at the interval.

Davitts, with the wind at their backs, began the second half well and two Hennelly points in the first four minutes gave them hope. A fine Kevin Feerick goal in the seventh minute after a sweeping move gave Hollymount Carramore a six point lead and knocked the stuffing out of the homeside. Liam Kearns pointed for Davitts but two Darren Coen frees in the 10th and 12th minutes had the visitors seven ahead. Cathal Hennelly pulled one back but Ian Costello and Darren Coen pointed two apiece before the finish with Hennelly getting Davitts only reply.

Davitts will quickly want to forget this error ridden performance with only Donal Ronayne, James Cummins, Ronan McNamara, Johnno Clarke and Cathal Hennelly displaying anything like their true potential.

Davitts U-16 team had a fine 2-11 to 1-8 victory over Naomh Padraig in the County B Championship in a game played in Ballindine on Tuesday evening. Naomh Padraig had the better of the first half exchanges and led their hosts by three points at the break. The Davitts lads turned on the style in the second half and ran out convincing winners in the end.

Naomh Padraig led by 1-6 to 1-3 at halftime with Jack Ronayne scoring the three points and James Ruane finishing off the goal after a great move involving Jack Ronayne, Caelainn Mullee and the hard working Liam Macken.

Davitts dominated the second half points by Jack Ronayne (2), James Ruane (2) and a second goal scored by Caelainn Mullee put the homeside in the driving seat. Naomh Padraig could only manage to add two points to their tally and points by Caelainn Mullee (2), Ryan McLoughlin and Liam Macken ensured a six point victory and a good start to Davitts Championship campaign.

Jordan Flanagan, Cian Naughton, David Devane and the superb Ciaran Fahy performed well throughout in the Davitts defence while in attack James Ruane, Jack Ronayne, Caelainn Mullee and Liam Macken can be very satisfied with their performances.

Davitts Juniors had a fine 2-8 to 1-8 victory over neighbours Claremorris in the County Junior B Championship on Sunday in a sunny Davitt Park. Claremorris led by 1-6 to 1-1 at halftime and few present would have predicted a home win at this juncture. Claremorris had raced into a 0-5 to 0-0 lead after fifteen minutes before a fine Aidan McTigue goal and an Evan Ronayne point gave Davitts hope. Claremorris responded well however and scored a goal and a point themselves to lead by five points at the break.

Davitts came out fired up for the second half and driven on by Brian Clarke, Patrick Keadin, the outstanding William Freeley, Liam Noone, Evan Ronayne and Aidan McTigue they began to eat into that lead. Davitts had narrowed the gap to two points after fine points via Aidan McTigue and Liam Noone (3) before midfielder John Costello got on the end of a sweeping move to rifle home an excellent goal and put his side ahead for the first time in the game, with ten minutes remaining. Liam Noone and Seamus Roche pointed to put Davitts three up and after Claremorris closed the gap to two, Liam Noone finished the scoring, firing over a beauty from the left sideline.

The wins means that Davitts top their group as they and Claremorris both advance to the Quarter-Finals.

Davitts travelled to Ballina and defeated their hosts to gain two valuable Senior League Div 1A points to ease their relegation worries. A superb performance from the returning Michael Conroy who scored eight points, seven from play, was key to this win. It also marked the return of Ballina’s Evan Regan, who looked lively, scoring 1-2 from placed balls and he was unlucky with two goal efforts that both hit the woodwork.

Two early Conroy points got the visitors off to a flyer but a foul on Ballina midfielder Kieran Sweeney resulted in referee Denis Harrington awarding a penalty which Regan hammered past Davitts goalie Micheal Mangan in the eighth minute. Rory Campion pointed for Ballina but points from Conroy and Josh Ronayne tied the game. Ballina went two clear with good scores from Alex Corduff and Regan but two more from Conroy levelled it again. Liam Kearns put Davitts ahead and Regan and Conroy exchanged scores before the interval to leave Davitts ahead by a point, 0-8 to 1-4 at half time.

Davitts took control of the game after the break and points from Josh Ronayne and Liam Kearns and a super individual goal by the impressive Andrew Peters put them six ahead after ten minutes. Points from Alex Corduff and Colm Leonard closed the gap but a trademark long range Ronan McNamara freekick kept Davitts ticking over. Before the finish points from Ballina’s Patrick McGarry and Ian O Dowd were cancelled out by two Michael Conroy points to cap off a wonderful individual display and a comfortable victory for Davitts.