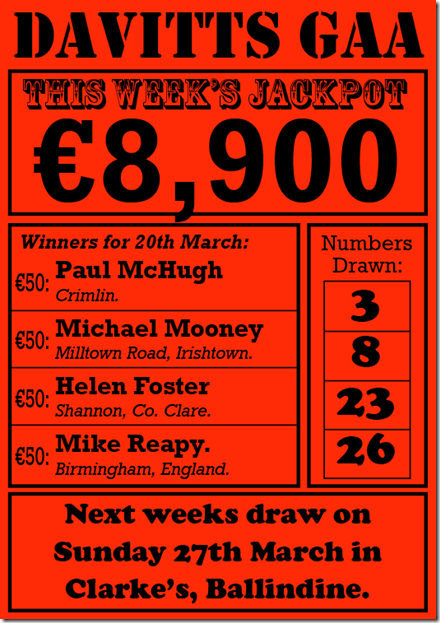 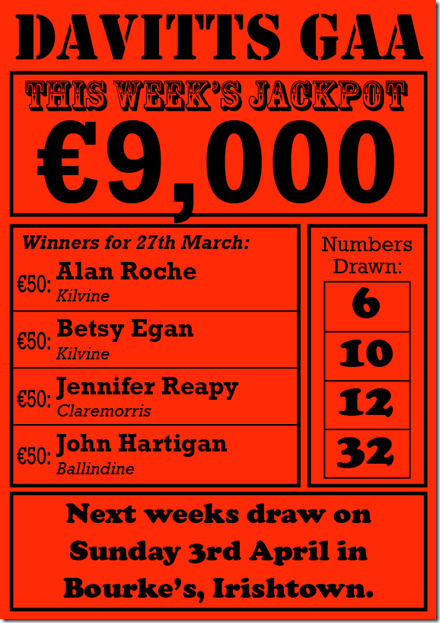 Davitts and Burrishoole played out a very entertaining U-16 Division 3 League match in Ballindine on Sunday with Davitts just edging it, 3-9 to 3-8. Burrishoole, playing into the wind, got off to a flying start and they led by 1-3 to 0-1 after ten minutes. This could have got much worse for the homeside but for a string of excellent saves by goalie Shane Cummins. Two fine goals courtesy of Shane Waldron and Niall Treacy brought Davitts back into the game as Burrishoole led by 2-5 to 2-4 at halftime. Davitts played much better in a very exciting second half. The play swung from end to end but a late penalty converted by Cian Naughton after Niall Treacy was fouled swung the game in the homeside’s favour.

Davitts qualified for the quarter final of the Michael Walsh Cup (Breaffy await) after earning an away draw against Charlestown on Saturday evening. Davitts were on top for long spells in this game but two first half goals from the homeside had Charlestown ahead by 2-5 to 0-6 after twenty minutes. Davitts rallied well and shot the last four points of the half to go in trailing by the minimum, 2-5 to 0-10, at the break.

The game could have swung either way in the second half but excellent defending by Davitts outstanding corner back Kevin Gallagher, James Cummins and Colm Roche curtailed the Charlestown attacking threat. Declan Healy and Michael Waldron did well at midfield but the exchanges were very much tit for tat in the second half. Josh Ronayne, Liam Kearns, Andy Peters, Aidan McTigue and substitute Keith Prendergast (who showed some majestic touches) drove forward as Davitts earned a deserved share of the spoils, with the impressive Josh Ronayne pointing a last minute equaliser to ensure his side a quarter final berth. 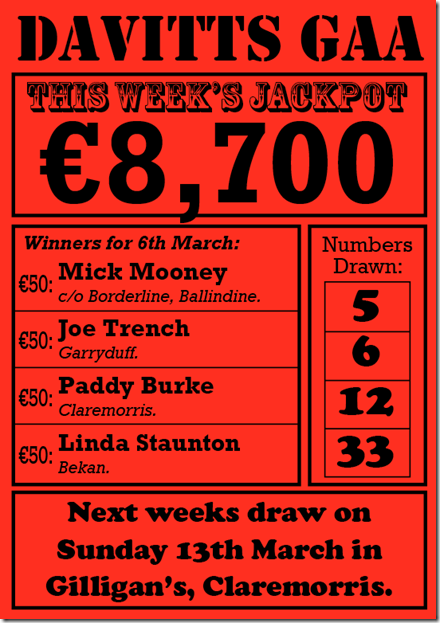 Change of Venue for U-16 Match 13th March

U-16 League Div 3: Burrishoole v Davitts in Newport on Sunday March 13th at 11am.

Davitts Senior Team hosted Knockmore in the Michael Walsh Cup on Sunday and after a tough and well fought encounter, the two sides shared the spoils. A draw was probably a fair result as Knockmore were the dominant team in the opening half with Davitts getting the upper hand in the second period but two late points by the visitors left the game all square in the end.

Knockmore led by 0-6 to 0-2 at halftime, a lead that didn’t flatter them as Davitts looked very sluggish. Liam Kearns scored the two Davitts points after being set up by the lively Michael Conroy on both occasions.

Davitts captain Declan Healy, with good help from his midfield partner Michael Waldron began to get on top around the middle and an opportunist goal from the impressive Josh Ronayne ten minutes into the second half left nothing between the sides. Well taken points from Josh Ronayne (4) and Michael Conroy had Davitts ahead by 1-7 to 0-8 with five minutes remaining. Knockmore as ever refused to throw in the towel and two late points saved the game for them.

Davitts U-16 team got their League campaign off to a flying start when overpowering Swinford by 4-17 to 2-8 in Ballindine on Sunday. Davitts inflicted most of the damage on the visitors in the opening half as they led by 3-11 to 0-1 at the interval. Midfielder Cian Naughton gave a man of the match performance and he helped himself to a personal tally of 3-8 from his midfield role. This was however by no means a one man show as the whole team played superbly, especially in the first half. The goalie Shane Cummins had a very solid defence in front of him led by the excellent Dimitri Trench at centre half back. Oisin O Connor and Takeshi Kilkenny were tight in the full back line while wing backs Jordan Flanagan and David Devane defended well as well as scoring a point apiece, two of the game’s best scores. Niall Kearns got through an amount of work at midfield alongside Naughton, and he chipped in with two fine points for good measure. The Davitts attack linked well with Dean Moran (1-3) in top form at centre half forward. James Ruane (0-1), Stephen Nyland (0-1), Niall Treacy (0-1) and Shane Waldron worked tremendously hard all through the game as did substitutes Fenton Kelly and Conor Walsh when introduced. 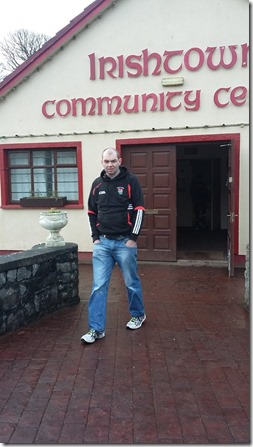 Everyone at Davitts GAA Club would like to wish a speedy recovery to ace clubman David Huane after his recent hip operation. David is a real Mr. Dependable at the Club, a tireless worker and ticket-seller, who rarely comes up with a lame excuse when asked to help out. David will recuperate at his sister Anne’s house in Meelickmore where he will have a family of Butlers waiting hand and foot on him over the coming weeks. Anne, a renowned cook, has promised to make some extra sumptuous meals for him during his recovery….