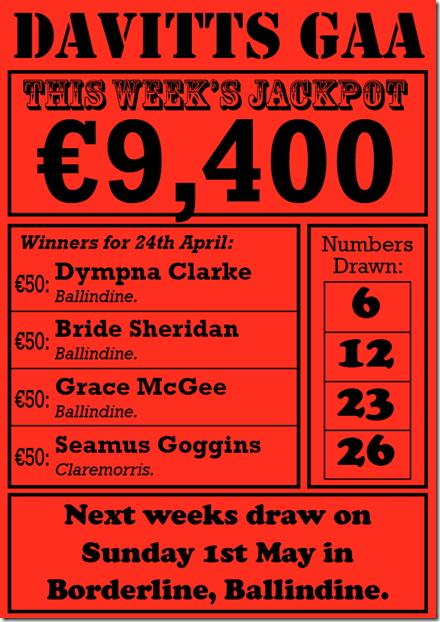 Davitts Junior’s travelled to Killala on Saturday and were well defeated, 2-19 to 0-10, in Division 1D of the Senior League. The home team had the upper hand throughout and led by 1-9 to 0-6 at the interval.

Davitts fought hard with Donal Ronayne, Patrick Keadin, John Costello, JP Kirrane, Paul Carey, Liam Noone, Evan Ronayne, sub Sean Waldron and Davitts best player on the night Gerald Griffin to the fore but Killala were much the stronger team on this occasion.

Kiltimagh hosted Davitts in this Senior League Division 1B clash on Sunday with the visitors just edging a thrilling encounter. A youthful Kiltimagh side had led by 0-8 to 1-4 at half time with Eoghan Lavin (4), Ronan Mallee, Sean Moran, Cillian Finn and Paul Kelly their point scorers. Liam Kearns, Michael Conroy and Josh Ronayne (2) had pointed for Davitts with Ronan McNamara bagging the first half goal. Davitts custodian Adrian McNamara had pulled off a superb save from a Stephen McDonnell shot in the 6th minute.

The two teams tore into each other from the start of the second half but a Kiltimagh goal finished by wing back Cillian Finn had them four points ahead midway through the second half. Davitts response was good and dynamic midfielder Colm Boyle burst through the Kiltimagh defence five minutes later, to feed Cathal Hennelly, whose raping shot came back of the crossbar and Josh Ronayne finished the rebound to the net to set up a nail biting finish. Both sides had chances to win the game as the two teams were tied entering injury time but after Michael Conroy was fouled thirty metres out, Liam Kearns showed great nerve to nail the resultant free kick and win the game for his side.

Davitts U-14 team produced another terrific performance in defeating Louisburgh by 9-21 to 2-5 in Ballindine on Thursday evening to maintain their 100% record in Division 4 of the League. What this team lacks in size is more than compensated for by their footballing skills and impressive teamwork.

The homeside introduced a number of subs on the resumption, all of whom impressed, and continued to score freely after the break. Second half goals from subs Dylan Walsh, Stephen Rattigan and Brian Bermingham compounded Louisburgh’s misery as Jack Trench (4), Fenton Kelly, Stephen Rattigan and Charlie Phillips tagged on some neat points.

It would be unfair to pick out individuals as this was a real team display with all of the players contributing on an evening when everything went Davitts way. 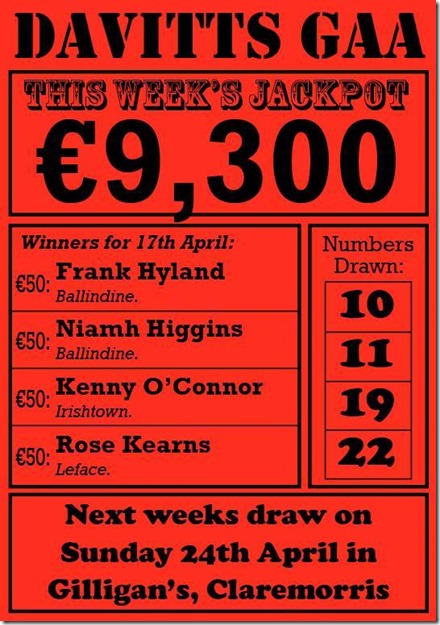 Davitts played Garrymore in the first round of the O Mara Cup in front of a large crowd in Ballindine on Sunday and the visitors would have been happier with the share of the spoils as they had trailed Davitts by four points with five minutes remaining. The exchanges were tough throughout, as one would expect in this local derby, and Garrymore led by 0-6 to 0-5 at halftime. Davitts scorers in the first half were Josh Ronayne (2), Liam Kearns (2) and Padraig Mangan.

The sides were level 0-9 each midway through the second half, Ronan McNamara and Josh Ronayne (3) scoring for Davitts, when Liam Kearns received a second yellow card (an extremely harsh decision) and Davitts looked up against it. They responded in fine fashion though and Cathal Hennelly netted after great work by Josh Ronayne, Johnno Clarke and Ronan McNamara in the eighteenth minute. Josh Ronayne pointed three minutes later and Davitts were looking good. A strong finish by a battling Garrymore side got them an unlikely draw.

Firstly on behalf of the club I would like to commend all the players, supporters, members, the parents and guardians of our underage players for their continued support and assistance throughout 2015. As a club we are looking forward to 2016 with anticipation and optimism. The club is well on course to open the new club house this year. These new facilities will serve all our teams as well as interested parties throughout the locality. When finished, the facilities will rival any throughout the county and serve the community and future generations for years to come.

The county board, in conjunction with clubs are again running the sale of €100 tickets. The county board have set up a facility whereby tickets can be bought online from the mayogaa.ie website. If you purchase in this manner please remember to pick Davitts as your club.

The cost of the ticket is €100. However, when we reach our quota we can keep €90 from every ticket sold above the quota. Our quota is 75 tickets. We aim to sell well in excess of this amount and with your support we can. A brief summary of outgoings of the club include: County Board levies & referees; €11,500, Transport for underage teams €6,500, Registration of teams, €3,650, loan repayments, €12,000 as well as everyday running of the club.

Davitts GAA are offering full family membership and six chances to prizes worth over €100,000 to purchasers of the €100 ticket. Your membership directly will directly help the club complete the new building this year. The first draw (of six) taking place in May. We were fortunate enough to have plenty of winners in 2015 and hopefully club members can be successful with the draw in 2016. If you have any queries, then please do not hesitate to contact any member of the executive at the numbers above. Here’s looking forward to another great sporting year.

We would appreciate if tickets could be returned to Ronan Kirrane, Michael Waldron, Sean Higgins, Louis Prendergast, Lucy Daly or any club official at your convenience.

Mayo GAA have developed a new website which will allow the club & county €100 tickets to be bought online. They know clubs put a lot of work into selling their tickets and this website will help clubs to sell ticket to supporters across Ireland as well as overseas. This website will help to boost all clubs ticket sales. The link to the website is here:

Supporters can log on to this website, purchase a ticket and when they enter their contact details they will be asked to nominate a club that their sale goes towards. For every sale a club makes online it will come off their overall quota meaning the more tickets clubs can sell the more money they can raise. All online ticket sales will be entered into the monthly draws with tickets sold locally by clubs. Clubs will also receive a breakdown of their online sales once the system is closed off, which will happen just before the first draw.

A link to the club & country ticket website can also be found on the right hand side of the main page of www.mayogaa.com as well as on Mayo GAA’s Facebook and Twitter accounts. The first draws are scheduled for the end of May.

If anybody needs more information or has any questions please contact Paul Cunnane, Mayo PRO on 087-6610968 or Ronan Kirrane on 087-9520169 or secretary.davitts.mayo@gaa.ie

Davitts minor team played host to Mayo Gaels on Tuesday evening and a strong second half performance earned them the victory after an entertaining game. A marvellous display of point scoring by Davitts captain Evan Ronayne, who bagged eleven points (nine from play), was a decisive factor towards the outcome of the game.

Mayo Gaels led by 1-2 to 0-1 after ten minutes and by 1-5 to 0-7 at the interval and in truth looked the more dangerous team in the first half.

Davitts began to get on top around midfield in the second half with John Kilkenny and Niall Kearns putting in strong shifts and Daniel Huane, Aidan Macken, Jack Ronayne and Dimitri Trench picking up an amount of breaking ball as the momentum switched to the homeside. Ciaran Fahy and Jordan Flanagan were superb in defence for the hosts but it took a late goal by Davitts sub Andrei Trench, who was on hand to flick Niall Kearns long delivery to the Gaels net, to clinch a deserved second league victory in a row for his side.