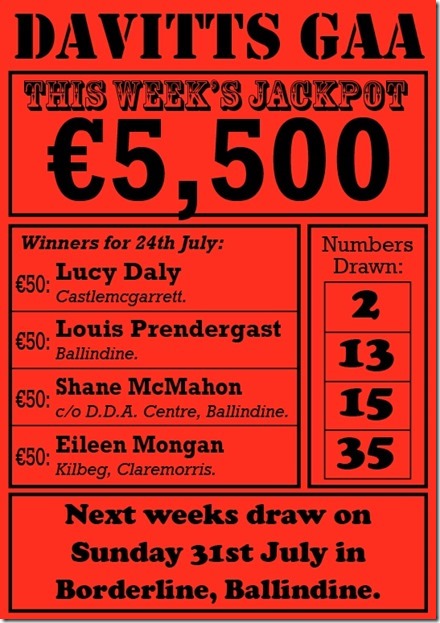 Davitts booked their place in the final of the Minor C Summer League with an impressive 3-20 to 2-9 victory over Breaffy in Ballindine on Friday evening. The attacking play from both sides was impressive but Davitts pulled away in the third quarter after they led by 1-10 to 2-5 at the break.

Davits will meet neighbours Hollymount Carramore in the final.

Garrymore defeated Davitts by a point, 1-9 to 1-8, in the replayed Semi-Final of the South Mayo Junior Championship on Wednesday evening in Ballindine. A point from a hotly disputed free kick late into injury time swung the match in the visitor’s favour.

The exchanges were tough throughout in front of a large attendance, with little to separate the sides at any stage of the match, but it was Garrymore that advanced to the A Final against Claremorris (with Ballindine the likely venue) while Davitts and Shrule Glencorrib will contest the B Final.

First half points from Clive Hennigan (2), Matthew Trench, Padraig Mangan and Liam Noone accounted for Davitts tally as the sides went in tied at 0-5 each at halftime.

An early second half goal from the visitors followed by a point put them four points ahead and Davitts looked in trouble. They fought back impressively however and Sean Waldron and Liam Noone pointed before Gerald Griffin scored an opportunistic goal and Davitts were in front with twelve minutes remaining. Garrymore equalised and then took the lead but Sean Waldron fired over a great point tie the game again. With extra time beckoning the referee Mark Tuffy awarded Garrymore a free in, a decision that will ensure he will never win a popularity contest in Ballindine or Irishtown, and Colm O Neill held his nerve well to shoot over the winner.

Davitts and Castlebar met in the county U-16 B Championship in Ballindine on Tuesday with Mitchels emerging the clear winners, 6-16 to 3-9.

Davitts got off to a flying start and led by 1-2 to 0-1 after five minutes with Cian Naughton pointing two long range efforts and Stephen Nyland smashing home a brilliant individual goal. Castlebar took over for the remainder of the half however and they led by 3-9 to 1-4 at halftime with Stephen Nyland scoring Davitts two points.

Davitts staged a stirring comeback in the third quarter and two goals from Niall Treacy and Cian Naughton, and points from Dimitri Trench (2) and Niall Kearns, gave the homeside hope with fifteen minutes remaining as the trailed by 3-12 to 3-7. Castlebar managed to stem the tide though and they finished the game strongly, adding 3-4 to their tally in the final quarter of the game with Davitts only managing to score two points from James Ruane and Dimitri Trench in that period.

Davitts made the early Sunday morning journey to Westport a winning one with a valuable three point victory over the locals in this Senior League Division 1B tie. A first half hat trick of goals by Ronan McNamara proved vital but at the other end of the field his brother Adrian produced some stunning saves that saw Davitts move to the top of the table.

Westport had no answer to to the power and skill of Ronan McNamara in the first half and two goals after two excellent deliveries from midfielders Declan Healy and Josh Ronayne put Davitts on their way. A third McNamara goal, after intercepting a short kickout, saw Davitts lead by 3-3 to 0-6 at the break. Davitts were operating with fourteen men as wing back James Cummins was dismissed in the 25th minute.

Davitts received another blow early in the second half with their very influential midfielder Josh Ronayne, who was having a blinder, having to be stretchered off with a serious facial injury. His teammates responded in the best possible fashion with Cathal Higgins, Michael Waldron, Declan Healy, Andy Peters, Liam Kearns, Aidan McTigue, the excellent Thomas Waldron and the afore mentioned McNamara brothers performing heroics as Davitts hung on to a three point lead.

Everyone at Davitts Club wish a very speedy recovery to Josh, a player of enormous ability.

Davitts captured the South Mayo U-14 B Title in fine style with a 10-12 to 4-10 victory over Carras after a fantastic display of attacking football in Ballindine on Thursday evening. The loser’s score of 4-10 would have won most games and were it not for the excellent defending of Thomas Ronayne and Fionan Gallagher in particular and the brilliant Gavin Ring in goals, the result would have been a lot closer. Michael Hett, Brian Og McTigue, Davy Hennessy and Cathal Corless all worked extremely hard in defence.

Sean Feerick and Fentan Kelly were two energetic midfielders as Davitts led by 5-6 to 2-9 at the break.

The star of the show though was undoubtedly Niall Treacy, Davitts brilliant centre half forward, who as well as scoring 5-5, was directly involved in most of his side’s scores. Some of the movement that led to Davitts scores was superb with Zack Keadin (1-1), Joe Prendergast (1-1), Jack Devane (2-2), Jack Melvin (1-1), Jack Trench (0-1) and Cathal Corless (0-1) completing the massive tally. Dylan Walsh, Stephen Rattigan, Brian Bermingham and Tristan Diskin all played their part in this victory.

Well done to the team management of Derek Byrne, Frank Kelly and John Trench who have put a lot of work into this team. The cup was presented to Davitts captain Jack Devane after the game by Michael King representing the South Board.

Davitts and Garrymore will have to meet again in the South Mayo Junior Championship after they played out a 1-7 apiece draw in the Semi-Final played in Garrymore on Wednesday evening. Garrymore were the better team in the first half as they dominated the exchanges against a very lethargic Davitts side. They led by 0-5 to 0-2 at half time as Davitts struggled in most sectors of the field. Liam Noone and William Freeley shot the two Davitts first half points.

Gerald Griffin narrowed the gap to two early in the second half but some sloppy defending resulting in the conversion of a penalty for the homeside left six points between the teams, with twenty minutes remaining. This score stung Davitts into action with players like Patrick Keadin, Donal Ronayne, Brian Clarke, Martin Cosgrove, Shane Treacy, Gerald Griffin, Liam Noone and Shane Mitchell leading the charge. Points from Liam Noone, Gerald Griffin and Shane Mitchell narrowed the gap to two points before Gerald Griffin flicked Martin Cosgrove’s long delivery to the Garrymore net to put Davitts in front for the first time in the game. It was Garrymore’s turn to show their character now and they did, scoring two points to regain the lead, but Liam Noone scored the equalizer as time ran out.

A draw was probably the fairest result as Claremorris await the winners of the replay in the Final. 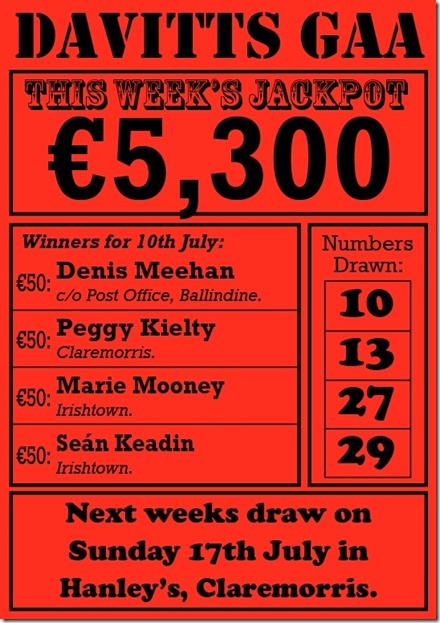