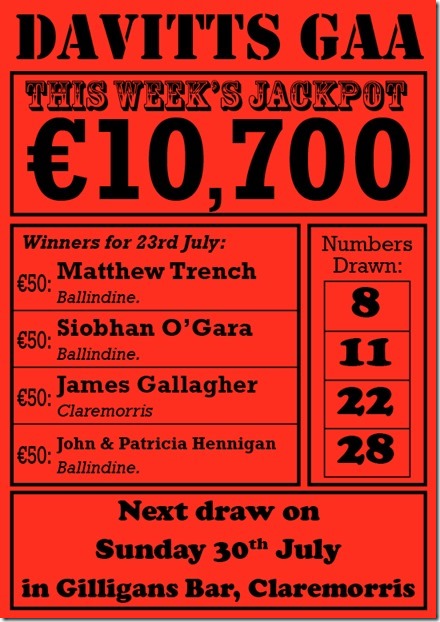 Davitts Junior team made it three wins on the bounce in the South Mayo Championship with a 3-16 to 3-11 win over Shrule Glencorrib in Ballindine on Wednesday evening. This win ensures Davitts place in the South Mayo B Final against the same opposition.

After a tit for tat first half the visitors led by 0-9 to 0-8 at halftime. They extended their lead to three points before Clive Hennigan, a constant threat, goaled for Davitts after great work by William Freeley. Both sides traded points before Davitts pulled five clear after fine points from Darren Connolly, Tommy Clarke (2), Clive Hennigan and a John Costello special from long range. A Shrule Glencorrib goal was cancelled out by one from William Freeley. Davitts goaled again via Richie Kilkenny, after a storming run by Patrick Keadin with the visitors adding their third goal just before the final whistle. Expect the final to be a less open affair.

Davitts U-16’s were pushed to the limit by a very spirited Tourmakeady side in Ballindine on Tuesday in the County D Championship, before a strong final quarter saw them through on a 2-19 to 3-7 scoreline.

Davitts opened brightly and an early Aidan Cosgrove goal and points from Fenton Kelly (2), Aidan Cosgrove, Niall Treacy and Stephen Nyland had Davitts ahead by 1-5 to 0-1 after ten minutes and looking good. Tourmakeady fought back well and scored a fine goal and four points as Davitts went in 1-8 to 1-5 ahead at the break, Sean Feerick, Joe Prendergast and Niall Treacy completing the home side’s tally.

Tourmakeady came out fired up for the second half and goals in the 2nd and 8th minutes put them 3-6 to 1-10 ahead. At this stage Davitts looked in trouble but a terrific Niall Treacy goal a minute later put them back on track A string of points from the outstanding Niall Treacy (4), Stephen Nyland (0-3), Fenton Kelly and Zack Keadin saw Davitts ease into the knock-out stages but not without a big fright.

Zack Keadin, Oisin O Connor, Fionan Gallagher, John Wallace, Stephen Nyland, Niall Treacy and Fenton Kelly played well for Davitts but they will know that a display like this will not be good enough in the latter stages of the competition. 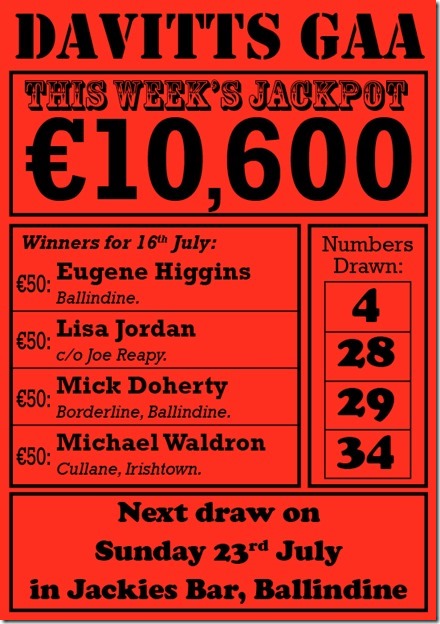 Davitts met Eastern Gaels in the Mayo Junior B Championship in Ballyhaunis on Saturday evening with Gaels winning by 0-8 to 0-7 after a tense battle. The game was played in difficult wet conditions and while the quality of the football may not have been the finest, the crowd got full value as there was never more than a kick of the ball between the teams, who both gave their all over the hour.

Eastern Gaels were the better team in the first half. They led by 0-3 to 0-0 after fifteen minutes before three quick Davitts points by Clive Hennigan, Gerald Griffin and Thomas Corless tied the game. Gaels added two more points before the break as they went in ahead by 0-5 to 0-3 after playing against the wind in the first half.

Davitts came out a much more determined team for the second half and driven on by the excellent Lawrence Daly, Kevin Gallagher, Martin Cosgrove, Michael Waldron, John Costello, Tommy Clarke, Richie Kilkenny and Thomas Corless, they began to take the game to the Gaels. Eastern Gaels opened the second half scoring but two excellent Michael Waldron points and another from Martin Cosgrove levelled the game with ten minutes to play. Eastern Gaels were down to fourteen men now, after a red card incident, and when Clive Hennigan shot Davitts into the lead for the first time in the game, it looked good for his side as the game entered stoppage time. Eastern Gaels showed great bottle however and fought back to equalise. Davitts now had to try and get a winner because the draw was no good to them but it was the Gaels who got the winning point deep into stoppage time, as they advance to the quarter-finals.

Davitts U-14 team put on a tremendous display of football on Thursday evening in Ballindine when defeating Claremorris by 3-16 to 2-8 in the Semi-Final of the South Mayo A Championship.

The homeside got off to a blistering start and two early goals, superbly finished by corner forwards Dylan Gallagher and Bon Glynn, put them on their way. They were on top in most sectors and the workrate and ball winning ability of midfielders Fenton Kelly and John Wallace meant Claremorris were in for a hard evening. Points from Jack Devane (2), Jack Melvin (3), Joe Prendergast, John Wallace and Dylan Gallagher had Davitts ahead by 2-8 to 0-5 at half time.

Davitts drove on early in the second half and neat points from Fenton Kelly and Davy Hennessy and three fantastic long range points from Jack Devane delighted the home crowd. A converted penalty by Joe Prendergast, after Bon Glynn was pulled down in the square put Davitts well clear midway through the second half.

Claremorris never threw in the towel and were rewarded with two goals but it was too little too late to have any impression on the outcome.

The attack moved slickly and linked impressively with all six getting on the scoresheet. Jack Devane, Joe Prendergast, Jack Melvin, Dylan Gallagher and Davy Hennessy were impressive with Bon Glynn having his best game to date.

Davitts will now face Ballinrobe in the Final.

Davitts U-16 team made it two wins from two in the County D Championship, with a fine 4-16 to 2-6 victory over Crossmolina in Ballindine on Tuesday evening. Superb performances from Niall Treacy and Fenton Kelly were instrumental in this victory with those two lads scoring a combined total of 3-9 (all from play). The Davitts defence too were in top form and behind them Joe Prendergast was excellent in goals, his first half penalty save was particularly impressive, at a time when the visitors were well in the game.

Davitts hosted Tourmakeady in the Senior League Div 1D on Sunday but were defeated by 2-16 to 2-7. Tourmakeady were the stronger team but there were several encouraging displays from the homeside who need to pick up points soon in order to stay in that division of the League. Tourmakeady had led by 2-7 to 0-3 at halftime but Davitts improved in the second half with Ryan McLoughlin and Kelan Cosgrove goaling and a display that will give them encouragement for the future.

Davitts travelled to Carramore to take on Hollymount Carramore in the South Mayo Junior Championship on Wednesday evening and won a thrilling contest by a single point, 2-15 to 2-14. Both teams played fast attacking football on a perfect evening for football.

Hollymount led by 1-9 to 1-7 at halftime with their attack in razor sharp form. Clive Hennigan, a thorn in the Holly Carra defence all evening, scored 1-3 in the first half, with Darren Connolly (0-3) and Tommy Clarke (0-1) accounting for the remainder of Davitts first half tally.

The game ebbed and flowed throughout an enthralling second half. A second Clive Hennigan goal, this one of very high quality, after good work from Micheal Mangan and a brilliant long pass from Patrick Keadin, turned the game in Davitts favour. Both teams kicked some brilliant points with Patrick Keadin (2), Clive Hennigan (3), Seamus Roche and Martin Cosgrove obliging for Davitts who managed to hold on to a one point winning margin at the end of a game that could have gone either way.