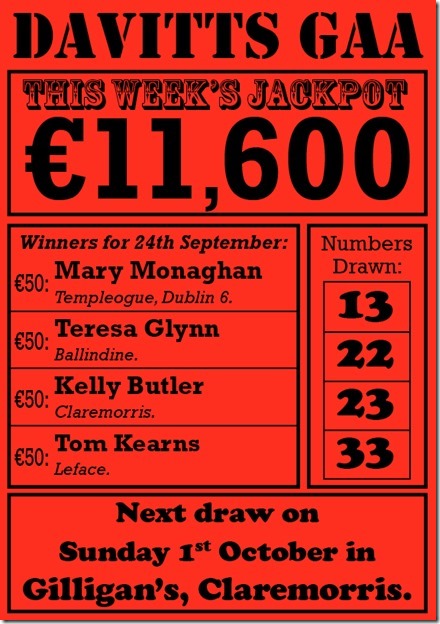 Davitts gave themselves a chance of survival in Division 1A of the Senior League with a three point derby win over Claremorris in Ballindine on Saturday. The conditions were very difficult with a strong wind and driving rain making life difficult for all the players. The youthful Claremorris team found Davitts hunger and aggression hard to cope with and in Colm Boyle, Davitts had the game’s key figure, with the Mayo star giving a superb inspirational display from his centre half back position.

Davitts played with the wind in the first half and the impressive Evan Ronane opened the scoring in the 3rd minute. James Shaughnessy equalised four minutes later with what was his side’s only score of the first half. Evan Ronane clipped over two tidy points in the 10th and 12th minutes with Liam Kearns extending Davitts lead to three in the 14th minute. This point was followed by a scoreless fifteen minute period, with both sets of defenders on top. Josh Ronayne shot a brace of points in the last four minutes of the half to leave Davitts ahead by 0-6 to 0-1 at the break.

Claremorris started the second half very well and two points from James Shaughnessy and another from James McCormack cut the lead back to two points after four minutes of the second period. Liam Kearns pointed in the 6th and 9th minutes for Davitts with James Shaughnessy and Mikey Higgins replying for the visitors to leave two points between the sides with fifteen minutes left. When James Shaughnessy pointed in the 16th minute to cut the gap to a single point, Claremorris looked the likely winners, but Davitts produced their best football in the final quarter with the magnificent Colm Boyle, Patrick Keadin, Padraig Mangan, Cathal Higgins, Tommy Waldron, Josh Ronayne, Andrew Peters, Evan Ronane and Ronan McNamara driving their team on to a deserved win. 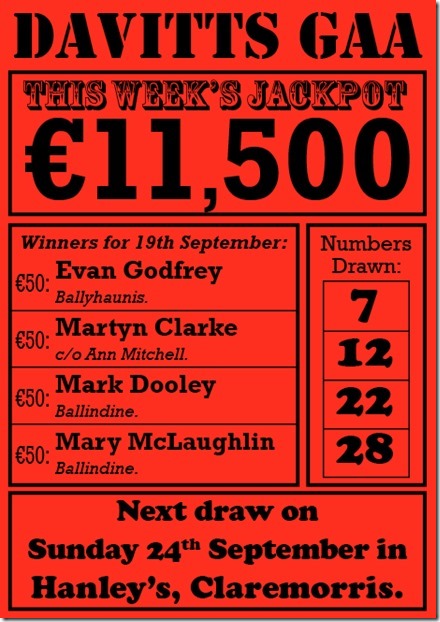 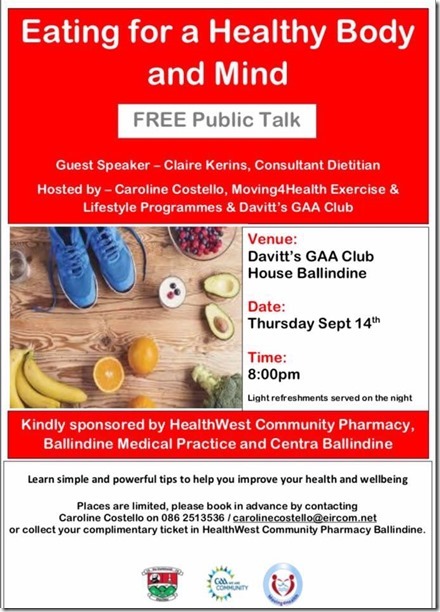 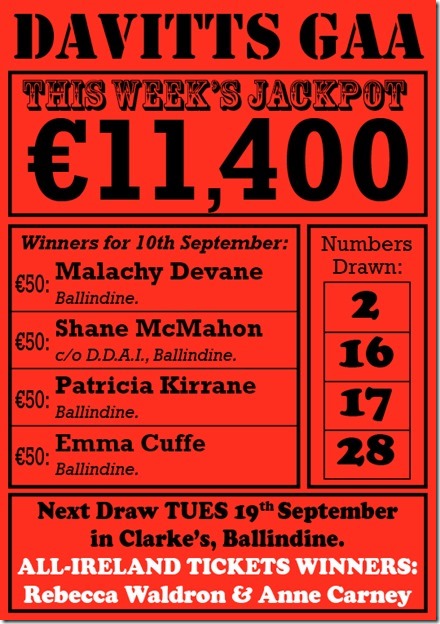 Davitts narrowly lost this local derby in Div 1A of the Senior League tie played in Garrymore on Saturday. After a poor first half the game opened up after the break and most present would agree that Garrymore were fortunate to claim the two league points.

The opening exchanges were tentative and the first score came after nine minute, a Garrymore goal which was followed by two points. They added a third point towards the end of the half after Ronan McNamara (2) and Evan Ronane had pointed for Davitts to leave the homeside ahead by 1-3 to 0-3 at the break. Davitts were unlucky when a fifty metre run by Josh Ronayne ended with his point blank shot being foot blocked in the square for what looked like a certain penalty to everyone in the ground except referee Jerome Henry, who yet again didn’t endear himself to the Davitts team and supporters when he ignored the penalty appeals.

Davitts opened the second half well and a goal by Liam Kearns after great play from Ronan McNamara and Andrew Peters followed by a classy Evan Ronane point had the visitors ahead in the second minute of the half. Garrymore replied with three points to go two up. James Cummins and Ronan McNamara pointed to level the game. It was nip and tuck as the match entered the final quarter. Davitts were making all the running but the homeside were hitting points on the counter attack. Michael Conroy and Ronan McNamrara (2) hit points for Davitts before the end but Garrymore held out to claim the league points.

No fault for this defeat could be placed on any of the Davitts defenders who were solid throughout with Adrian McNamara, Josh Ronayne, the excellent Andrew Peters, Ronan McNamara and Evan Ronane also playing well.

Davitts U-16 team were defeated, 3-12 to 0-14, in the South Mayo B Championship by an impressive Ballinrobe side in Ballindine on Tuesday evening. Ballinrobe led by 1-7 to 0-9 at the break with points from Stephen Nyland (5), Niall Treacy (3) and Fenton Kelly accounting for Davitts half time tally.

Ballinrobe’s ability to score goals swung the game in their favour. They scored a second goal midway through the second half and a third with a few minutes remaining as they advanced to the final. Davitts just couldn’t break down a resolute Ballinrobe defence to get the goals they needed and they had to settle for second half points by Stephen Nyland (2), Niall Treacy, Zack Keadin and Fenton Kelly. 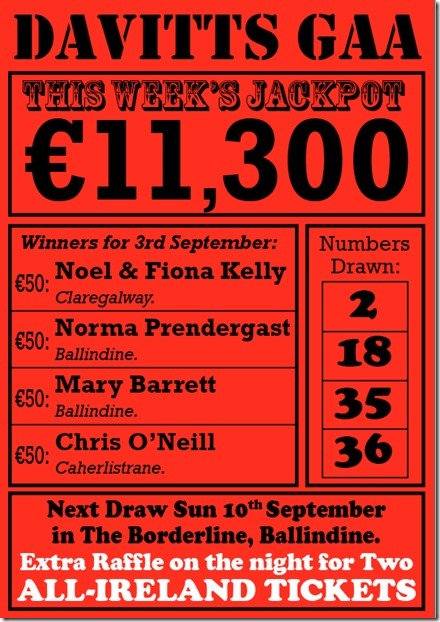