Davitts U-21 team got their County B Championship campaign off to a winning start thanks to a fine 2-11 to 1-12 victory over Ballaghaderreen in Bekan on Saturday night. Both teams made light of the difficult conditions to provide a good evening’s entertainment for the large attendance.

Ballagh got off to a flying start and led by 1-3 to 0-0 after ten minutes, despite playing against the wind. Davitts didn’t panic however and dominated for the remainder of the half. Conor Keane (2), Evan Ronane (5) and Cathal Hennelly pointed and Michael McGarry converted a penalty after he was fouled following a great run, to leave Davitts ahead by 1-8 to 1-3 at half time.

As in the first half, Ballagh started the second half impressively and they shot seven unanswered points to go two points up after fifteen minutes, and Davitts looked in big trouble. They showed tremendous character however and points from Conor Keane and Evan Ronane levelled the match before the alert Shane Treacy finished to the net after the Ballagh goalkeeper could only parry Ryan McLoughlin’s shot.

Ballagh fired over two points to narrow the gap to a single point but Shane Treacy had the final say with the final point of a great game.

This was a fine team performance with every Davitts player displaying great character after a slow start.

Davitts Juniors took on Crossmolina in their final Division 1D league game in Ballindine on Sunday but they were defeated, 4-15 to 3-10 after an entertaining match. The game marked the return of Mark Ronayne after a long absence with a knee injury and he aquitted himself well. There also were first starts for Kelan Cosgrove and Liam Macken and they didn’t look out of place at this level. Daniel Huane, fresh from his County Senior Hurling victory for Tooreen, played a fine match at wing back.

Crossmolina led by 1-8 to 1-3 at half time and were the sharper team throughout as some of the Davitts players struggled with the difficult underfoot conditions while others made sure the waterboys had a busy afternoon. 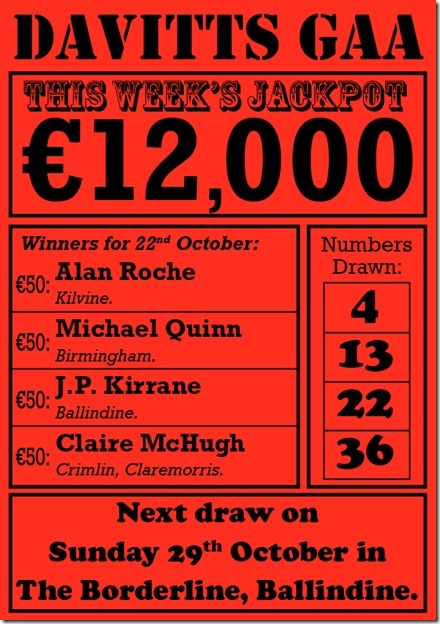 Saturday Oct 28th, U-21 B Championship: Ballaghaderreen v Davitts in Bekan at 7pm.

Davitts retained their Senior Championship status in emphatic style in Bekan on Saturday night after a thirteen point defeat of Ballinrobe. The game was played in terrible conditions but Davitts played some superb football as Ballinrobe made the drop to the Intermediate Championship for next season. The damage was done in the first half as Davitts, in devastating form, took the game by the scruff of the neck from the start and built up a 3-10 to 1-1 lead by the break.

A razor sharp Michael Conroy opened the scoring in the third minute with a point and the same player buried a goal a minute later. Ronan McNamara fired over a long range free in the 6th minute before Ballinrobe’s Kevin Quinn was on the end of a fine move before slotting home a great goal two minutes later. This score was followed by a string of excellent Davitts points courtesy of Michael Conroy, Evan Ronane (2) and Josh Ronayne (2) with James Murphy getting Ballinrobe’s sole reply in the 21st minute.

Ronan McNamara pointed a 45 with a superb strike in the 25th minute and two Davitts goals in quick succession a minute later effectively killed the game off. The first was created by Michael Conroy and finished by Josh Ronayne and when the resulting kick-out was intercepted by the alert Evan Ronane, who lobbed the keeper for his side’s third goal, the writing was well and truly on the wall for the young Ballinrobe side. Josh Ronayne and Evan Ronane added points before the break to leave Davitts ahead by 3-10 to 1-1 at halftime.

Ballinrobe came out fighting in the second half and Kevin Quinn pointed in the 4th minute. Their cause was not helped by the sending off of midfielder James Murphy in the 10th minute but they showed great character and Evan O Brien added three points to their tally as Davitts were content to sit on their big lead. Josh Ronayne fired over three fine points in the 27th, 30th and 31st minutes for Davitts before Kevin Quinn kicked the final score of the game for Ballinrobe.

Ballinrobe had fine performers in Connor Keane, Evan O Brien, Kevin Quinn and James Murphy on a night when little went right for them. 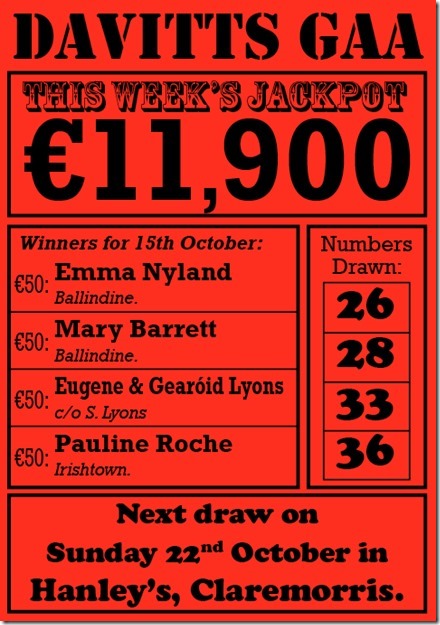 Aghamore ensured their Senior Championship status for next season with a seven point victory over Davitts in this relegation play-off replay played in Ballyhaunis on Sunday. Davitts will rue the spurning of a number of first half scoring chances when they were dominating the midfield exchanges through the efforts of Ronan McNamara and Declan Healy.

Davitts had two early goal chances but Darragh Hunt, the Aghamore keeper, pulled off two superb saves in the opening two minutes, to deny Josh Ronayne and then Paul Carey. Davitts got off the mark with points from Andy Peters, Paul Carey and Evan Ronane but all their good work was cancelled out by Aghamore’s marauding midfielder Sean Og Tighe who goaled after a rare foray into the Davitts half in the 10th minute. Alan Freeman pointed a minute later to put his side ahead but Davitts response was impressive. Points from Evan Ronane, Ronan McNamara and a beauty from Josh Ronayne put Davitts two points ahead with ten minutes remaining in the first half. Ross Egan narrowed the gap to one but two neat Evan Ronane points had Davitts three up as the first half entered injury time. Alan Freeman and Ross Egan fired over two injury time points for Aghamore as they went in a point down (and very happy) at the break, 0-8 to 1-4.

Four unanswered points courtesy of the influential Alan Freeman (3) and Fergal Boland had Aghamore three up after twelve minutes. Michael Conroy pulled one back for Davitts but Fergal Boland cancelled that one out in the 18th minute. Two minutes later Davitts cause was not helped by the dismissal of corner back Padraig Mangan. Five well taken points from Aghamore’s Alan Freeman with Davitts only reply coming from Andy Peters, left the East Mayo men seven point victors and Davitts facing Ballinrobe in the relegation decider.

Davitts were beaten, 4-16 to 0-9, by a Micheal Forde inspired Ballycastle side in this Senior League Div 1D clash played in Ballindine on Saturday evening. Three goals in the last seven minutes of the game put a harsh look on the final scoreline of what was a well fought game.

Ballycastle had led by 0-9 to 0-7 at halftime with Clive Hennigan (5), Aidan McTigue and John Costello supplying Davitts points. The result was in doubt until the final quarter when Ballycastle’s superior fitness levels led to an unanswered 3-4 in the last ten minutes. 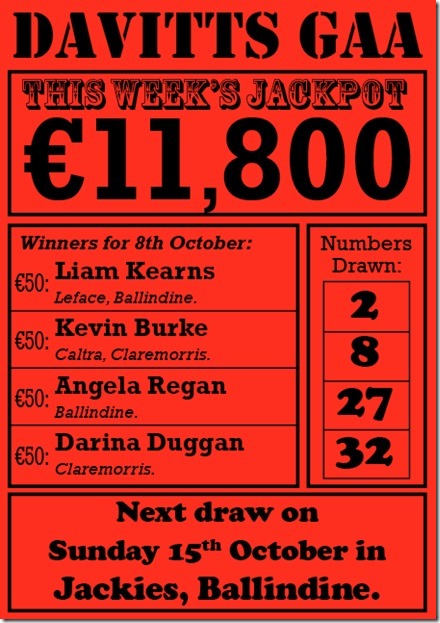