Westport proved too strong for Davitts when the two sides met in Div 2 of the Senior League in Westport on Saturday evening.

The home side got off to a flyer and shot five excellent points in the first ten minutes of the game, before Josh Ronayne got Davitts on the board. Davitts chances were lessened when Andrew Peters, their lively centre forward, had to retire after receiving a heavy knock to the head. Josh Ronayne picked off another point in the 16th minute to narrow the gap to three points but Westport finished the half strongly to lead by 0-10 to 0-2 at half time.

Whatever chance Davitts of getting back into the game evaporated when Westport goaled two minutes into the second half. The Davitts players fought manfully to the end and added points from Josh Ronayne (2) and Michael Conroy as Westport added on five more points before the end, to win easily.

The U-16 team defeated Balla in the League Div 3 on Tuesday evening. Davitts struggled in the first half, losing star player Niall Treacy with a wrist injury early in the game, but led by 1-5 to 1-1 at the break. Bon Glynn got the goal with Jack Devane (2), Zack Keadin, Brian Og McTigue and Fentan Kelly pointing.

Jack Devane scored an early second half goal and they tagged on points from Fentan Kelly(2), Cathal Corless (2), Sean Feerick and Davey Hennessy before Bon Glynn struck for his second goal of the match. It was all one way traffic now as Balla, (down to 13 players following two dismissals) had no answer to the strong running home team. Davitts added points from Jack Devane and Sean Feerick before John Wallace fired home the final goal in spectacular fashion to leave Davitts the victors on a scoreline of 4-14 to 1-3.

All of the team and subs played well especially in the second half.

The Junior Team got their County Championship campaign off to a winning start with a hard earned 3-11 to 2-7 away win over Lacken on Sunday. Davitts, assisted by the strong wind, had raced into a 1-4 to 0-0 lead with points from Michael Conroy, Liam Kearns (2) and Richie Kilkenny and a Tommy Clarke goal. A Lacken goal followed but Davitts got back on tracks with a Michael Conroy goal and a point each from Tommy Clarke and Richie Kilkenny. Lacken got a second goal after some sloppy Davitts defending but a Liam Kearns penalty gave Davitts a 3-6 to 2-2 lead at halftime.

The homeside came out with all guns blazing and four unanswered points left just a goal between the teams and Davitts looked in trouble. The Davitts defence stood firm in the second half however and points in the last quarter from Liam Kearns (3), Richie Kilkenny and Dara O Flaherty gave Davitts a seven point win. 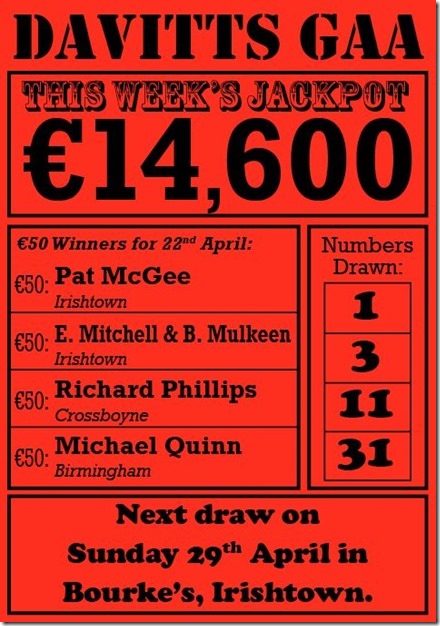 Davitts U-16’s and Kiltimagh met in a Div 3 League tie in Ballindine on Tuesday evening with Davitts coming out on top after a superb display of attacking football from both sides. The final scoreline of 5-21 to 4-6 looks like it was a very lopsided game, but in truth Davitts had to be clinical, and they were, to overcome what looks like a very good Kiltimagh team.

The Davitts forwardline were unstoppable, especially in the first half, with Niall Treacy and Jack Devane, who scored an incredible 0-15, both superb, and ably assisted by Zack Keadin, Cathal Corless, Bon Glynn and Dylan Walsh.

Fentan Kelly would have been another contender for man of the match as he played a blinder at midfield alongside the hard working Sean Feerick.

Davitts U-14 team defeated Ballaghaderreen by 3-17 to 3-6 in Div 2B of the League on Thursday evening. The scoreline could have been so different however but for the outstanding display of goalkeeping by Dylan O Brien for Davitts. He made a series of superb saves throughout the match to deny the visitors what looked like certain goals.

Ballaghaderreen dominated for large periods of the second half but a combination of poor shooting and Dylan O Brien’s goalkeeping kept Davitts ahead. Jack Melvin added another 1-3 with Cathal Corless and Dylan Gallagher firing over a point each as the homeside saw out the game. 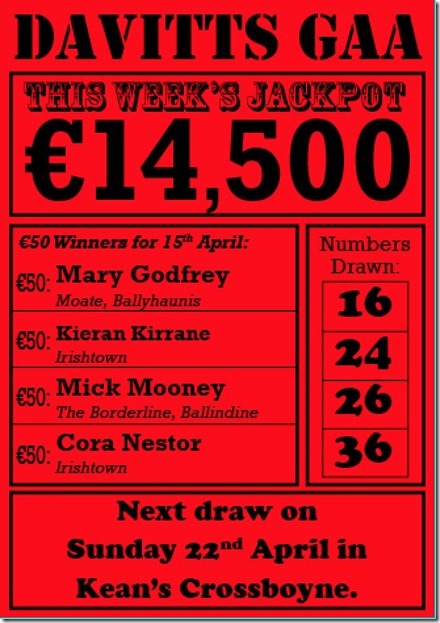 Davitts U-14’s hosted Mayo Gaels in a Div 2B League match played in miserable conditions in Ballindine on Monday evening. After a tight first half, with only a point separating the sides at the break, Davitts took over in the second period to run out convincing winners by 6-14 to 1-9. The loss of one of their midfielders with a serious looking wrist injury at the start of the second half didn’t help Mayo Gaels cause. We all wish the lad a speedy recovery.

After a slow start, Davitts got into their stride and led by a point, 1-8 to 1-7 at the interval. The dynamic Conor McDermot scored the goal after a good run. Dylan Gallagher (2), Cathal Corless (2), Jack Melvin (2), Bon Glynn and Conor McDermott all pointed as both teams made light of the difficult wet and windy conditions.

This was a good all round team performance with Dylan O Brien, Mark Bermingham, Dylan Gallagher, Cathal Corless, Conor McDermott, Jack Melvin and Harry Fallon in top form for Davitts.