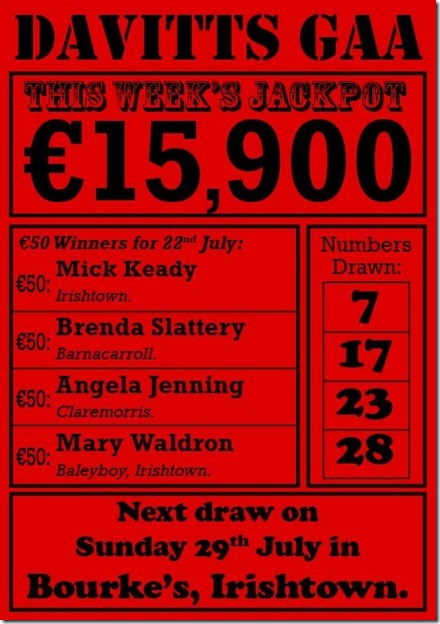 Davitts Minors played Carras in the South Mayo A Final in Claremorris on Friday evening with the Garrymore/Kilmaine outfit running out convincing winners on a 2-17 to 0-5 scoreline. Carras were dominant throughout the game and had built up a 1-9 to 0-4 halftime lead. Jack Devane (2), Stephen Nyland and Cian Naughton got the Davitts scores.

Stephen Nyland opened the second half scoring with a third minute point but Carras pulled away adding a goal and eight points to their tally to take the title in style.

Davitts Junior team got their Division 4 league campaign back on tracks with an impressive 1-21 to 2-9 victory over Ballintubber in Ballindine on Saturday evening.

Davitts, playing with the breeze in the first half, went in at the break ahead by 1-9 to 2-4. Liam Kearns (4), Mattie Trench, Shane Mitchell, Tommy Clarke, Dara O Flaherty and Liam Noone were the point scorers with Dara O Flaherty goaling after good work by John Kilkenny.

Davitts GAA Club will hold a Cul Camp from Monday, July 30th to Friday, August 3rd. Activities commence at 10am and finish at 2.30 pm each day.

The Camp is for boys and girls aged between 6-13 years with coaching and games provided for in football, hurling and rounders.

Free GAA gear and backpack for all the participants.

You can book your place online at kelloggsculcamps.gaa.ie.

You can also register children at the Clubhouse  on the morning before the Camp commences.

A very understrength Davitts U-16 team were defeated, 4-17 to 2-11, by Mayo Gaels in the Mayo B Championship in Ballindine on Tuesday evening. A stronger Mayo Gaels outfit deserved their win after an open game of football.

The game marked the return of Davitts goalkeeper Gavin Ring who had a lengthly absence from football through illness and he aquitted himself well. 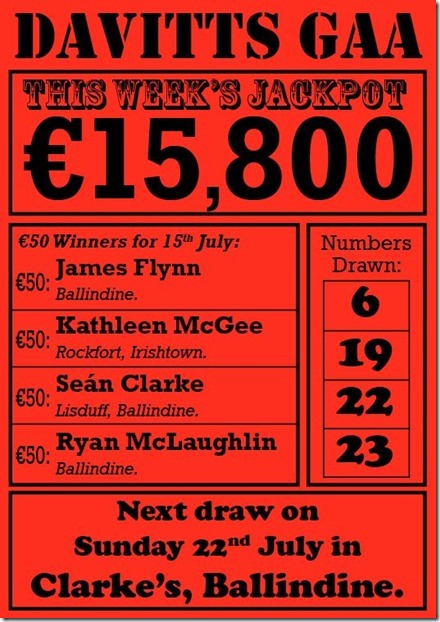 The U-16 team lost to Kiltimagh by 4-14 to 2-13 in a cracking County B Championship match played in Ballindine on Tuesday evening. While both teams were understrength for this game, Davitts were dealt a severe blow after eighteen minutes when Micheal Hett and Fenton Kelly, two players that were on top of their game, were involved in a nasty clash of heads causing both players to leave the field. Fenton returned at the start of the second half but Micheal had to sit out the remainder of the game.

An early Davitts goal by Fenton Kelly, after a tremendous run from Thomas Ronayne, three minutes into the second half gave them a lift and five minutes later they were awarded a penalty. Fenton Kelly’s well struck kick was superbly saved by the Kiltimagh keeper, one of several top class saves he made throughout the game. This save inspired his team-mates and Kiltimagh went on to win by a flattering seven point margin.

Davitts hosted local rivals Carras in Division 2 of the Minor League on Friday evening and it was the visitors that prevailed, winning by 1-16 to 1-11 after an exciting game.

Carras led by a point at the break, 1-7 to 1-6, with Niall Treacy netting for the homeside when he rose highest to flick a long delivery over the head of the advancing Carras goalkeeper. The exchanges were tough and at this stage it would have been difficult to predict the outcome.

A purple spell for the visitors midway through the second half in which they shot five unanswered points sealed the win for an impressive Carras outfit.