Davitts U-15’s had a convincing 5-18 to 0-5 away win over Eastern Gaels in the County League Div 2 on Sunday morning. Eastern Gaels opened the scoring with a third minute point but Davitts crashed home three goals in the first quarter, a superb individual effort from Fentan Kelly and two from Jack Devane, the first after great work from Thomas Ronayne and the second after John Wallace created the chance. They added six points to their total before the break with the homeside shooting three to leave Davitts ahead by 3-6 to 0-4 at halftime.

With Davitts being assisted by the wind in the second half Eastern Gaels faced a mammoth task to get back into the game. They had a lot of possession but found the Davitts defence very hard to breach with Micheal Hett, Brian Og McTigue, John Wallace, Thomas Ronayne and Brian Birmingham all in excellent form in front of Tristan Diskin, a solid keeper.

Davitts hard working midfield partnership of Fentan Kelly (1-5) and Fionan Gallagher (0-1) worked superbly in this game ensuring a steady supply of ball for their impressive forwards. 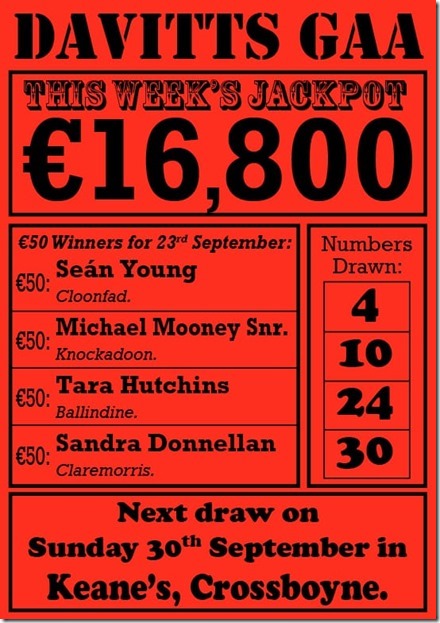 Aghamore won a Senior Championship Relegation play-off against Davitts in Ballyhaunis on Saturday evening. It was a very well balanced game until Davitts went down to fourteen players with seven minutes to play, and then Aghamore used their numerical advantage well to ensure their Senior Championship status for next season.

Cathal Hennelly opened the scoring with a point after thirty seconds. Aghamore replied through Fergal Boland a minute later. An Evan Ronane free in the third minute saw Davitts regain the lead but Ross Egan kicked the equaliser on six minutes with a neat point from play. Shane Treacy kicked a beauty in the 7th and Ronan McNamara put Davitts two up in the 9th minute. Ross Egan kicked the game’s next three points in the 12th, 15th and 22nd minutes, the latter two from frees that often wouldn’t be awarded, with Davitts supporters particularly annoyed as Josh Ronayne looked to have been fouled in the 16th minute for a free in but the ref waved play on.

Colm Boyle, the best player on view, kicked a super point to equalise for Davitts and Ross Egan and Liam Kearns swapped points to leave the sides all square, 0-6 apiece, at the break.

Alan Freeman, quiet in the first half, opened the second half scoring with a goal in the first minute, when he converted Iarla Carty’s fine long delivery at the second attempt after Davitts keeper Cian Naughton had saved his first effort. A Fergal Boland point in the sixth minute put Aghamore four ahead and they looked like they were set to pull away. Davitts however didn’t bow and when Colm Boyle scored a terrific goal, a powerful finish after bursting past several players in the ninth minute, the gap was back to a point. Josh Ronayne shot the equaliser in the 12th minute.

Sean Og Tighe and Liam Kearns pointed for either side in the 14th and 15th minutes before Ross Egan put Aghamore ahead a minute later from a free kick.. The game was well poised at this stage but with seven minutes remaining, Egan pointed again for Aghamore and from the kick out Patrick Keadin, Davitts corner back got a second yellow card. An Iarla Carty goal in the 26th minute killed off the South Mayo challenge and Alan Freeman kicked the last score of the game, a point in the 31st minute.

Put this date into your diaries folks. A fun night for all ages. Questions to suit everyone and the most unique DJ in Europe providing the musical entertainment afterwards. It’s going to be epic… 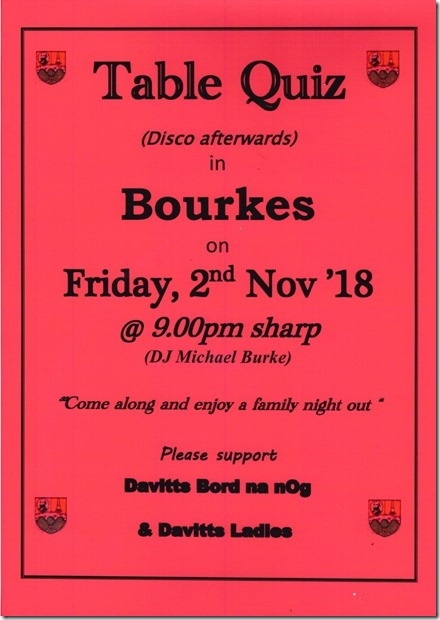 Davitts Minor Team bowed out of the County B Championship after being defeated, 3-17 to 1-13, by a physically stronger Claremorris side in Claremorris on Friday evening.

The home side, much more economical in attack, got off to a flying start and led by 1-5 to 0-0 before Davitts opened their account with a Cian Naughton point in the 14th minute. Stephen Nyland pointed again two minutes later and Dean Moran, Niall Treacy and Cian Naughton shot three fine points before the interval to leave Claremorris ahead by 1-8 to 0-5 at the break.

Davitts needed to get the second half off to a good start but a goal in the first minute put Claremorris firmly into the driving seat. Davitts fought valiantly but some excellent goalkeeping by the Claremorris keeper foiled the visitors on a number of occasions.

Cian Naughton (2), Niall Treacy, Stephen Nyland (4) and Niall Kearns scored second half points and Stephen Nyland goaled in the 29th minute but it was Claremorris that advanced to the Semi-Final. 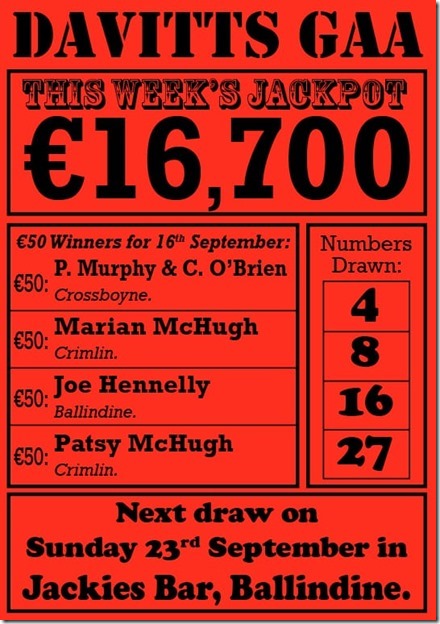 Best of luck to Garryowen McMahon 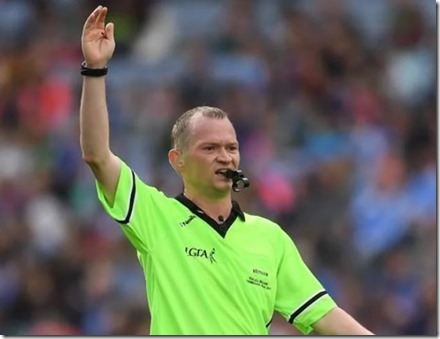 Best of luck to Garryowen McMahon who will referee the All-Ireland Ladies Senior Final on Sunday between Cork and Dublin. It is a great honour for Garryowen to be chosen to referee such a big game. Two of his umpires are local men Mick Roche and Michael Hynes… 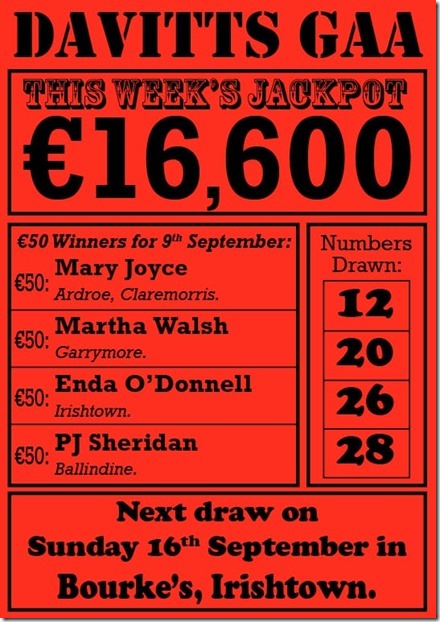 Davitts and Hollymount Carramore met in the South Mayo U-16 B Final in Claremorris with the Davitts lads coming out on top by the narrowest of margins after a great battle.

Davitts got off to a flyer and points from Charlie Phillips, Zack Keadin, Jack Devane (2) and a Niall Treacy goal, had them ahead by seven points after ten minutes. A Hollycarra point a minute later was cancelled out by Niall Treacy. Hollycarra then began to take control.

They pointed again in the 15th minute and three minutes later they were awarded a penalty which they duly converted. Davitts influential centre back Thomas Ronayne received a black card for the foul leading to the penalty and he was replaced by Fionan Gallagher. Hollycarra added three points in the next five minutes to tie the game.

Davitts responded in fine style with a point from Jack Devane. Man of the match Niall Treacy fired home a brilliant goal a minute later after a superb pass from Davey Hennessy. Hollycarra were awarded a second penalty in the closing minute of the half but the kick went high and over Gavin Ring’s crossbar for a point to leave Davitts ahead by 2-6 to 1-6 at halftime.

Hollymount Carramore started the second half well and they goaled in the second minute to level the match. Niall Treacy put Davitts ahead with a fifth minute point and extended the lead with a similar score two minutes later. Hollycarra pulled a point back in the 9th minute and another point in the 10th minute was quickly cancelled out by a fine Joe Prendergast score for Davitts.

Niall Treacy pointed in the 17th minute but Hollycarra replied two minutes later. In the 21st minute a superb Niall Treacy run ended up with him being awarded a free in which he duly converted. Davitts supporters felt a little aggrieved that the advantage rule wasn’t implemented (as Niall buried a goal as he was being fouled) or that a penalty wasn’t awarded but it turned out that the point was crucial.

Niall Treacy extended Davitts lead to two in the 25th minute, a pointed free after Fenton Kelly’s storming run was ended with a foul. In the 29th minute Hollycarra pointed after a move that could easily have ended up with a goal. In the tense closing moments, Hollycarra threw everything they had at Davitts in the quest for an equaliser but the defence stood firm and Davitts held on to win by a point.

Gavin Ring had a steady game in goals for Davitts and in Micheal Hett and Jack Trench he had two outstanding defenders in front of him. Thomas Ronayne’s black card was unfortunate but in Fionan Gallagher, Davitts had an excellent replacement. Charlie Phillips and Davey Hennessy were two industrious wing backs, contributing in defence and attack, with Brian Og McTigue also doing well when introduced.

Midfielders John Wallace and Sean Feerick formed a very effective partnership. Up front the team captain Niall Treacy led by example with an all action display and he got great assistance from the very lively Zack Keadin, Fenton Kelly, Jack Devane and Joe Prendergast.

Well done to the Management team of Derek Byrne, Declan Kirrane and Tommy Ronayne who have put in so much work with this squad.