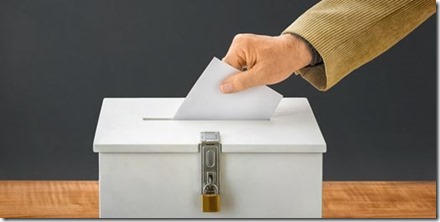 The nominations are as follows in alphabetical order: 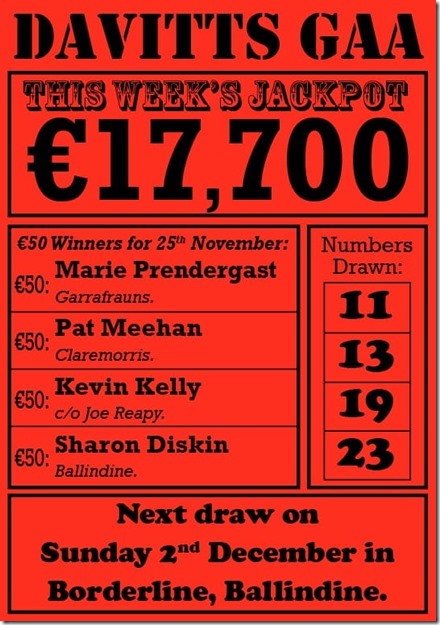 Davitts GAA Club will hold their AGM on Saturday evening December 1st at 7pm in the Clubhouse in Ballindine New members would be more than welcome.

The Bord Na nOg AGM will take place on Sunday December 2nd in the Clubhouse at 5pm. 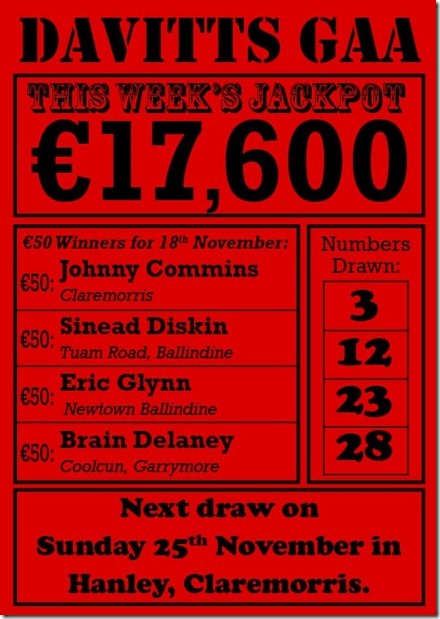 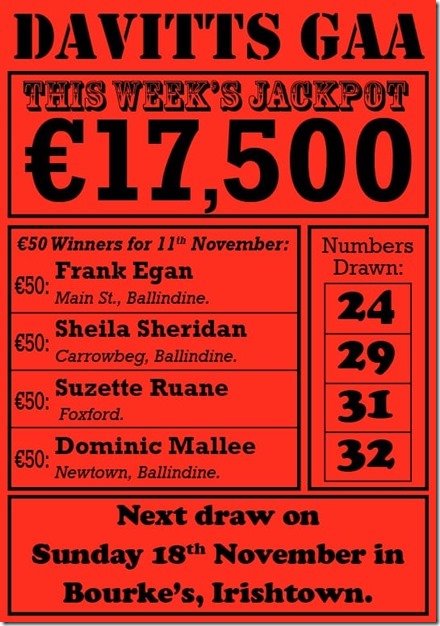 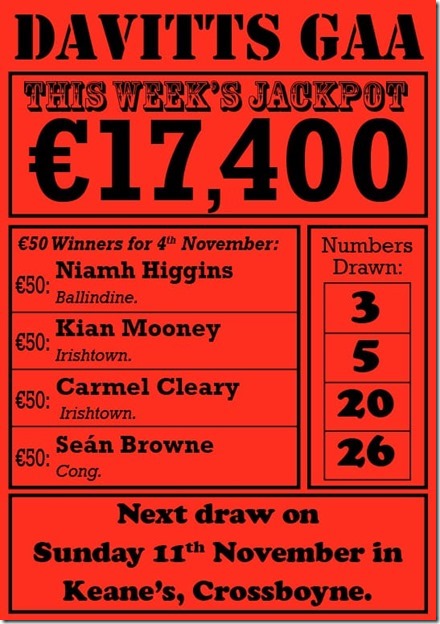 Davitts captured the County U-15 League title in Ballyheane on Sunday with a 2-10 to 0-3 victory over a gallant Naomh Padraig side. The scoreline might suggest otherwise but Davitts had to dig deep to secure their victory after losing team captain and full back Micheal Hett to a black card early in the second half, influential midfielder Fenton Kelly to a second yellow in the 10th minute of the second half and flying wing forward Bon Glynn (2nd yellow) six minutes later. The team showed great resolve however to go on and win with their work-rate being particularly impressive.

Davitts got off to a great start with Fenton Kelly pointing in the first minute and Jack Devane and Thomas Ronayne extending the lead in the next six minutes with two fine points. Naomh Padraig opened their account but Davitts replied with a four points blitz between the the 18th and 22nd minutes through Jack Melvin, Jack Devane, Davey Hennessy and Joe Prendergast. Naomh Padraig shot the final score of the half to leave Davitts ahead by 0-7 to 0-2 at the break.

Jack Devane opened the second half scoring for Davitts before Micheal Hett received a black card, a big blow as he was playing very well at full back. Naomh Padraig pointed to narrow the gap to five points and Davitts were dealt another blow when they lost midfielder Fenton Kelly in the 10th minute to a second yellow card, in what looked like a desperately harsh decision.

This seemed to fire up the Davitts lads and Jack Devane responded with a superb point from way out. The referee then issued Bon Glynn a second yellow card to put his team down to thirteen players and in their next attack, Naomh Padraig were awarded a penalty with twelve minutes remaining.

The spot kick was well struck but Davitts keeper Tristan Diskin was equal to it with a wonderful save and Brian Birmingham collected the rebound. He passed it to Fionan Gallagher, Davitts impressive midfielder, who went on a searing sixty metre run down the left wing before transferring to wing back John Wallace who soloed once before unleashing an unstoppable shot to the roof of the net from 25 metres to shoot a goal that will long remain in the memories of all present.

Davitts were now defending like demons throughout the field and in the 28th minute, another impressive breakaway move ended with Dylan Gallagher finding Jack Melvin with a clever pass and when he was pulled back the ref pointed to the spot. Jack Devane gleefully slotted home the resultant penalty and the same player pointed again before the finish to give Davitts a well deserved but also hard earned win.

Tristan Diskin had fine game in goals and his penalty save was crucial for his side. The fullback line of Brian Birmingham, Micheal Hett and Brian Og McTigue also impressed with their tenacious defending.

Davitts halfback line of John Wallace, Thomas Ronayne and Cathal Corless were outstanding from start to finish, doing the basic defending very well but also attacking with real menace at every opportunity.

Fenton Kelly was having a super game at midfield before he got dismissed and his midfield partner Fionan Gallagher had another excellent game.

Wing forwards Davey Hennessy and Bon Glynn worked tirelessly and Jack Devane, after a slow start by his standards, exploded into life in the second half.

Joe Prendergast had a great match from start to finish with Dylan Gallagher and Jack Melvin also impressing with their skill and workrate. Sub Mark Birmingham didn’t put a foot wrong when introduced for the unfortunate Micheal Hett.

Davitts U-21 travelled to Ballyheane to face Breaffy in the County B Championship requiring a victory and achieved their goal after a tremendously determined performance, defeating the homeside by 3-9 to 0-15.

An extremely impressive start by the Davitts lads with Evan Ronane in unstoppable form up front, saw that player shoot four superb points in the opening five minutes of the match. An injury to Davitts centre forward Shane Treacy in the tenth minute didn’t help their cause but his replacement Daniel Huane was to play a major role later on.

Breaffy began to get into a rhythm and had the lead cut back to two points after twenty minutes before a long range free kick from Evan Ronane ended up in the net to put Davitts 1-5 to 0-3 ahead. Ryan McLoughlin scored two points for Davitts and Breaffy tagged on two of their own before Evan Ronane was force to retire injured with a leg injury after a heavy tackle from a Breaffy defender. Stephen Nyland converted the resultant free and Davitts led by 1-8 to 0-5 at the break.

Davitts got off to a brilliant start in the second half with Ryan McLoughlin goaling in the third minute. Breaffy responded well with six unanswered points to reduce the lead to three but crucially they couldn’t breach a determined Davitts defence for the goal they badly needed.

Daniel Huane whose strong running was proving a real nuisance for the homeside shot a great point to lift the siege and when Ryan McLoughlin goaled again after a great move involving Aidan Macken, John Kilkenny, Stephen Nyland and Daniel Huane, Davitts found themselves seven points ahead with twelve minutes remaining.

Davitts midfielder Stephen Nyland received a second yellow card and Breaffy shot four more points before the final whistle as Davitts defended as if their lives were at stake.

All of the Davitts players could be very satisfied with their performances in this game with Dimirty Trench, Thomas Corless, Aidan Macken, John Kilkenny, Stephen Nyland, Daniel Huane, Evan Ronane and Ryan McLoughlin in top form.

Davitts GAA Club’s AGM will be held in the Clubhouse on Saturday December 1st at 7pm.