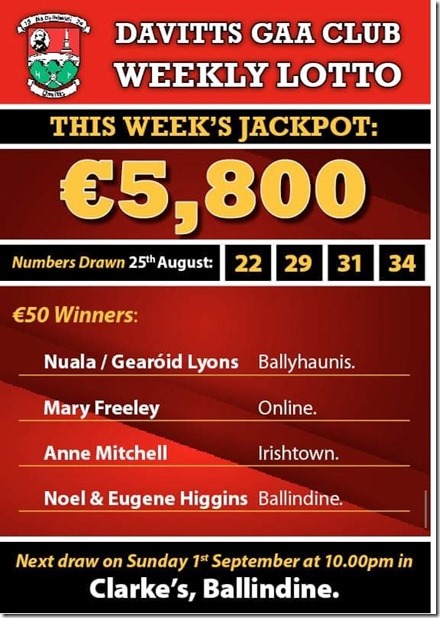 Davitts travelled to Foxford to face Moy Davitts in the Mayo Senior Championship on Saturday and defeated the local side by nine points after a powerful display.

Davitts started of in whirlwind fashion with the superb Cathal Hennelly opening the scoring with a point in the first minute. Liam Kearns and Evan Ronane added to the tally with points in the fifth and eighth minutes before Stephen Nyland buried his side’s opening goal, a clinical finish after fielding Ronan McNamara’s excellent long delivery. Davitts added three further points through Liam Kearns, Cathal Hennelly and Evan Ronane before Moy Davitts finally got off the mark with an 18th minute point. They added four more points before the break with Davitts captain Ronan McNamara replying with a trademark long range free to leave the visitors ahead by 1-7 to 0-5 at half time.

Moy Davitts began to exert pressure on the Davitts defence but the pressurising from every Davitts player made it difficult for them to manafacture scoring chances. They did shoot two points in the opening ten minutes of the half with Liam Kearns replying for Davitts. The next point came in the 19th minute, another Ronan McNamara special with Moy Davitts pointing two minutes later. Davitts tightened their grip on the game in the last ten minutes as Moy Davitts threw everything they had into attack. Shane Treacy and Ronan McNamara pointed and Ronan McNamara, now operating at full forward, goaled deep into injury time, flicking on Keith Prendergast’s long ball past the Moy Davitts keeper, to give his side a well deserved nine point win.

This was an impressive team display from Davitts with the work ethic of all twenty players that featured being noteworthy. Davitts will now face Kiltane in two weeks time in the crucial final group game.

A big thank you to Colm O’Conaire of O’Conaire Consulting Engineers, Main St., Ballindine for his sponsorship. Colm is pictured presenting a cheque to Davitts Treasurer Michael Waldron. 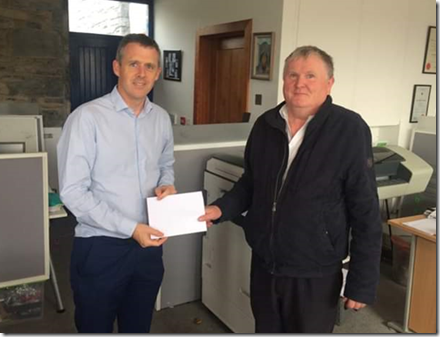 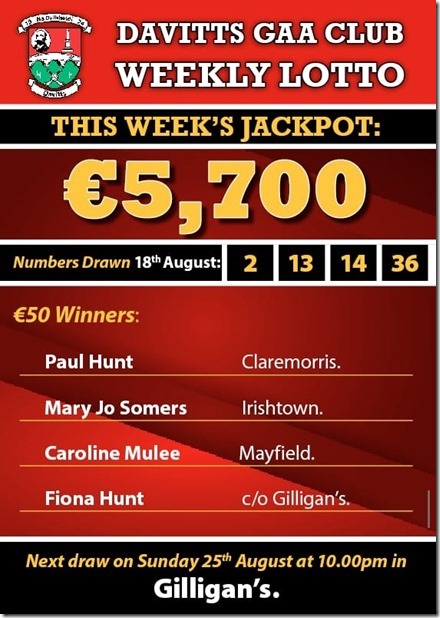 Davitts and Ballyhaunis met in Ballyhaunis in Div 3 of the Senior League with the impressive home side winning by 1-12 to 1-7. A flying start (while playing into the stiff wind), yielding and unanswered 1-3, laid the foundations for the Ballyhaunis victory.

They opened the scoring with a fourth minute goal and added three more points by the 9th minute before Ronan McNamara, Davitts best player, opened his side’s account with a 12th minute point. The strong running Ballyhaunis side extended their lead with a 13th minute point but a Liam Kearns goal four minutes later, after great work by the impressive Stephen Nyland, gave the visitors hope. Ballyhaunis extended their lead with two points in the 18th and 21st minutes but Davitts finished the half well and shot points via Cathal Hennelly and Ronan McNamara (2) to leave them trailing by 1-6 to 1-4 at the break.

Davitts played with more determination in the second half but Ballyhaunis always remained comfortably in control. The homeside opened the second half with an early point. Liam Kearns pulled one back in the 10th minute but Ballyhaunis replied with two points in the next two minutes. Evan Ronane in the 18th minute and Shane Treacy in the 24th added points for Davitts with Ballyhaunis adding two more of their own before the finish to earn the League points and also retain the Prendergast Cup.

Most of the Davitts players would be disappointed with their performances but Tommy Waldron, Dmitry Trench, Ronan McNamara, Stephen Nyland, Cathal Hennelly, Darragh McGale and Shane Treacy did best against a Ballyhaunis side that at times looked very good.

Eastern Gaels defeated an understrength Davitts side on Sunday in Div 4 of the Senior League in Ballindine on Sunday. They won a well contested game by 4-10 to 2-6, scoring an unanswered 2-1 in the first eight minutes and 1-2 in the last eight minutes of an enjoyable game.

After a slow start Davitts settled down and driven on by Mark Ronayne, Shane Mitchell, Dara O Flaherty and Shane Treacy, the best player on the pitch, they began to claw their way back into the game. Points from Mark Ronayne (2), Dara O Flaherty and Shane Treacy and two Treacy goals left just a point between the sides at the break as Gaels led by 2-5 to 2-4.

Both teams found scores harder to come by in the second half as the defences tightened up somewhat. Eastern Gaels tagged on a goal and three points with Davitts replying through Tommy Clarke and Shane Treacy points as the game entered the last ten minutes. A further 1-2 from the visitors saw them finish the game off well and claim the spoils.

Davitts and Claremorris served up a cracker of a game in the South Mayo U-14 A Championship in Ballindine on Thursday with Claremorris coming out on top by a single point, 5-17 to 7-10. There was no sign of a blanket defence on view as both sides slugged it out from the first whistle.

Davitts raced into an early lead and goals from Sean Keadin (2), Fionn McLoughlin and Dylan Gallagher helped the homeside to a lead of 4-5 to 0-6 after twenty minutes. Claremorris refused to lie down and they shot a goal and three points before the break to reduce the lead to five points at halftime, 4-5 to 1-9.

The Claremorris resurgence continued after the break as they scored freely to catch and overtake the home side. Davitts kept coming back as goals from Sean Keadin (2) and Mark Birmingham kept them within a score of the visitors. In injury time Davitts hit the post with a goal attempt, had two wides and two goal efforts superbly saved by the Claremorris keeper as they threw everything they had at their neighbours, who were relieved to hear the final whistle. This was a great advert for football and both sides are a credit to their management teams.