SENIOR CHAMPIONSHIP MATCH.
We have a very limited number of tickets available for the championship game against Moy Davitts on Saturday at 5pm in Ballindine. Any members interested please contact John Costello on 0879079987 to be placed on a list.
No orders after 6pm Thursday.
We cannot guarantee tickets as demand will certainly outstrip supply. 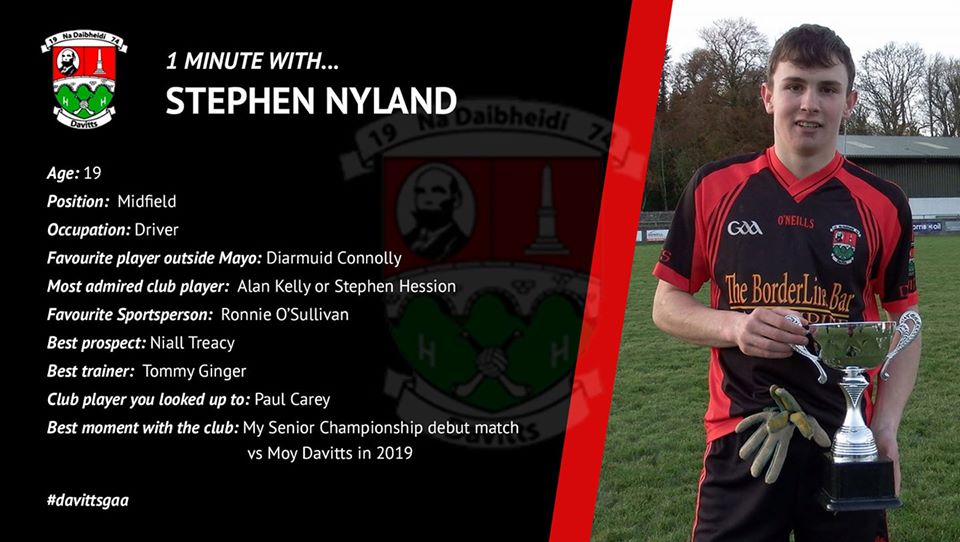 This week’s Presto Result:
Numbers drawn were 16, 24, 32, 33.
The Jackpot was not won.
The following were the €50 winners:
Linda Mooney, Ballinlough
Maria Prendergast, Cloonfad
Chloe Goggins, Irishtown
Shannon McHugh, Crimlin
There will be a Jackpot of €9,500 in next Sunday night’s draw.
Play online by clicking on the following link:
https://play.clubforce.com/play_newa.asp?ll_id=120#Anchor 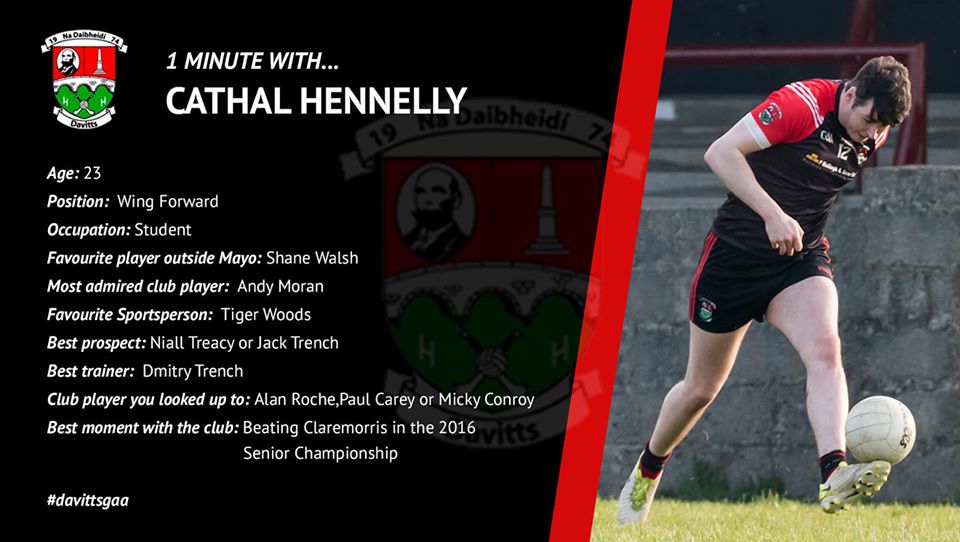 Kiltane made the long journey to Ballindine on Saturday evening to face Davitts in the Michael Walsh Senior League but a well taken Jack Ronayne point for the homeside in the closing seconds swung the outcome in Davitts favour. It was a result that easily could have gone Kiltane’s way but the game would have been an ideal preparation for next week’s Senior Championship for both teams, the exchanges were very tough throughout with a real Championship air about the match. The match also marked the welcome return of Colm Boyle, his first action since getting injured against Dublin in the National League in February, and he played the first half in his usual competitive style, before sitting out the second half.

After Kiltane opened the scoring in the opening minute Davitts began to dominate the first quarter. A red card for a Kiltane defender in the 10th minute didn’t help their cause and points from Evan Ronane, Ronan McNamara (2), Jack Ronayne and Cathal Hennelly (2) put Davitts 0-6 to 0-1 ahead as the teams took the first half water break. A 21st minute Kiltane point was cancelled out almost immediately by Ronan McNamara who was proving to be a very effective target man. Kiltane narrowed the gap with a pointed free but referee John Glavey awarded Davitts a penalty in the 24th minute when Ronan McNamara was fouled and Jack Ronayne confidently buried the spot kick. Kiltane responded in great fashion and they goaled themselves one minute later. Davitts Evan Ronane was sent off in the 27th minute and the teams swapped points before the break with Ronan Mac again the Davitts scorer to leave Davitts ahead by 1-8 to 1-4 at halftime.

Kiltane opened the second half scoring with a point in the first minute and Ronan Mac cancelled that out with his fifth point. Jack Ronayne extended the lead with a fourth minute point but got sin binned a minute later. With the numerical advantage now in their favour the visitors struck a purple patch. They added an unanswered 2-1 in the next five minutes before Ronan McNamara pointed to settle a clearly rattled Davitts team. Kiltane lost a man to a black card and they went into the second half water break ahead by a point, 3-6 to 1-11.

Kiltane extended their lead with a 21st minute point but the game turned again in the 26th minute when Ronan McNamara was pulled down for a second penalty. Man of the match Jack Ronayne, back from the sin bin, again stepped up and cooly slotted home to put Davitts ahead by a point again. Kiltane responded with two points but young Niall Treacy punched over the equaliser after a good run in the 31st minute. Another Kiltane black card and a second yellow for Davitts captain for the day Patrick Keadin added to the drama as time ran out. Jack Ronayne shot the winner with the outside of his right boot to win the game for Davitts just before the final whistle of a very eventful match.

Davitts and Kilmaine met in the first round of the South Mayo Junior championship in sunny Ballindine on Sunday with Davitts coming out on top after a fell fought contest. Two well taken second half goals by Davitts scorer in chief Liam Kearns proved to be the difference between the sides.

Kilmaine led by 0-6 to 0-5 at halftime with Liam Kearns (4) and Niall Treacy the Davitts point scorers. Davitts defending was impressive throughout with all six defenders playing very well, limiting the Kilmaine attack to long range shots at goal.

Davitts midfielder Liam Macken levelled the game in the first minute of the second half but when Liam Kearns finished off a superb move with a clinical finish, for Davitts first goal in the sixth minute, the tide had turned in favour of the home team. The same player repeated the dose with six minutes remaining to completely finish off the contest. Kearns also supplied two second half points as did Niall Treacy, who impressed greatly throughout the game.

Ballaghaderreen proved too strong for a gallant Davitts side in this Michael Walsh Senior League tie played in Ballaghaderreen on Saturday evening. The homeside got off to a flying start and had built up a 1-5 to 0-1 lead after the first quarter to set up the victory and while Davitts fought back impressively, with the defence tightening up considerably, the experience of the Ballaghaderreen side saw them see the game out.

Kuba Callaghan opened the scoring with a second minute point which was cancelled out a minute later by Davitts Cathal Hennelly. Ballagh pointed via Andy Moran and Darragh Kelly before eagle eyed referee Paul Lydon awarded the homeside a penalty in the 8th minute, spotting an off the ball jersey tug from distance, and Andy Moran gleefully accepted the gift to finish emphatically past Davitts impressive keeper Cian Naughton. Kuba Callaghan and Cian Hanley added points to extend Ballagh’s lead to seven points before Cathal Hennelly pointed for the visitors in the fifteenth minute.

An Evan Ronane point in the 21st minute was cancelled out by Andy Moran before points from Ronan McNamara and Cathal Hennelly narrowed the deficit to five points. Cian Hanley had the last score of the half, a neat point in the 30th minute, to see Ballaghaderreen lead by 1-8 to 0-5 at the break.

Early points from Thomas Carmody, Darragh Kelly and Cormac Doohan stretched Ballagh’s lead to nine points as they threatened to run riot but Davitts began to show real grit. Evan Ronane pointed in the 39th minute and centre forward Jack Ronayne gave the visitors hope with a cracking goal, firing home an unstoppable shot in the 42th minute. Barry Kelly pointed for Ballagh three minutes later but Davitts points from Cathal Hennelly (2) and Ronan McNamara left three between the sides with six minutes remaining.  Owen Jordan extended Ballagh’s lead to four and Ronan McNamara pointed for Davitts who tried valiantly to get the goal to save the game but were denied by goalie Pat Sharkey and some terrific defending in the final moments of an enjoyable match.

Davitts Senior team regained the Prendergast Cup when they defeated Ballyhaunis on Tuesday night in Ballindine. The final scoreline of 1-10 to 1-8 was probably a fair one with Davitts shading a very competitive match.

Davitts, playing against the wind, got off to a flyer and three fine points from Evan Ronane saw the homeside race into a 0-3 to 0-0 lead before Ballyhaunis opened their account in the 12th minute. Jack Ronayne pointed a free and Evan clipped over his fourth to extend Davitts lead but the newly introduced water break broke the momentum and a regrouped Ballyhaunis finished the half stronger. They added a goal and four points to their tally in the second quarter (which could have been greater but for some wasteful shooting) with Cathal Hennelly getting Davitts sole reply to leave Ballyhaunis ahead by 1-5 to 0-6 at halftime.

Ronan McNamara got the crucial score of the game in the fifth minute of the second half after great work by Evan Ronane to see Davitts regain the lead. Josh Ronayne added another fine point while the second half water break was timely as the temperatures rose.  Ballyhaunis threw everything at the homeside in the final quarter but an excellent point from the tenacious Niall Treacy, who had replaced the injured Evan Ronane, and two well struck points from Jack Ronayne kept Davitts noses in front.

This was a good match for both sides as the competitive season fast approaches. Garryowen McMahon reffed the game sensibly, letting it flow as much as possible.

Mary Prendergast presented the cup to Davitts captain Tommy Waldron after the game.