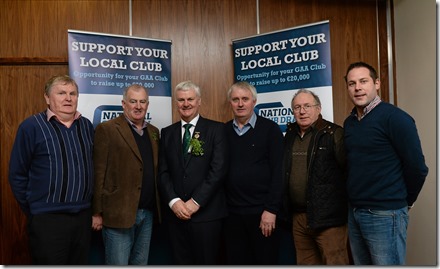 Davitts GAA Club was recently recognised at a function in GAA Headquarters for our outstanding efforts in selling the Croke Park €10 Tickets last Christmas / New Year. Our club sold the second highest number of tickets in the country – 1,629. We were pipped to first spot by Dublin club Na Fianna, who have a vastly bigger population to sell to. Na Fianna sold just 64 tickets more than Davitts, which is a testament to both the ticket sellers from Davitts, our supporters (both home and away), and the local community.

Without the tireless work of the ticket sellers and the considerable generosity of the people and businesses that purchased the tickets, we would never have been able to achieve such a fantastic number of ticket sales. Thanks to everybody who contributed to this fundraising effort!

It is worth remembering that Davitts got to keep every Euro raised from the sale of these tickets – €16,290 – which has been a welcome addition to the Building fund for the ongoing development at our grounds. And who knows, maybe next time we might be able to go one better and claim the top spot…!!