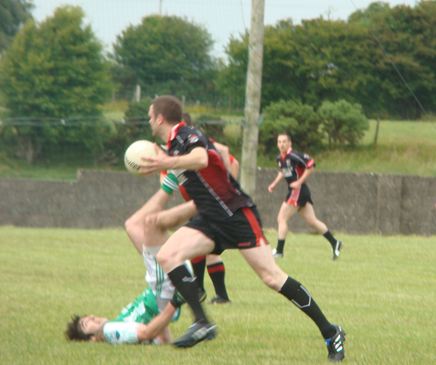 Davitts and Achill locked horns in the intermediate championship in Ballindine on Sunday, with the points being shared in a dour encounter, which was spoiled by the extremely difficult crossfield wind. Davitts got an early goal when Michael Conroy was on the end of a great move involving Pat Coyne, Dave McDonagh and Fergal McGrath, after 8 minutes, but Achill responded well and went in at half time ahead 1-5 to 1-4. This scoreline would have been worse but for some great defending by Paul Carey and James Cummins.

The game hung in the balance right up to the last seconds with Ronan McNamara scoring some excellent points for the home side in what was a very disappointing performance. The only Davitts players that can be pleased with their game were Paul Carey, James Cummins, Colm Boyle, Ronan McNamara, Pat Coyne, Aidan McTigue and Michael Conroy, while second half substitutes Martin Cosgrove and Keith Glynn also did well.