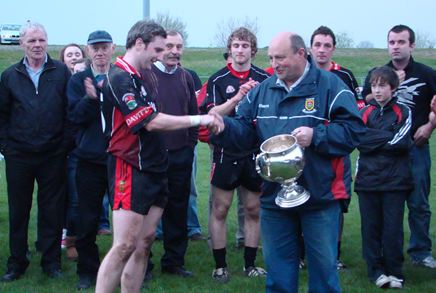 Davitts won the O’Mara Cup Final on Saturday evening in Ballinrobe with an excellent 0-13 to 1-9 victory over Shrule-Glencorrib. The two teams were tied at halftime, 0-5 apiece, in this entertaining game, Shrule-Glencorrib scoring the last three points of the first half. Davitts were the better team for most of the second half and were 0-13 to 0-8 ahead with the game moving into injury time, but a great individual goal by Trevor Mortimer and an Eoin Ronaldson point left just a point between the teams in a tense finish. Davitts held out for a deserved win, their first O Mara Cup victory since 1995.

Paddy Kirrane had a sound game in goals while corner backs Kevin Gallagher and Frankie Barrett defended superbly and young full back Michael Waldron gave a very confident display throughout the game. James Cummins had a great game at centre back and his three interceptions late on in the game were vital. Beside him, Johnno Clarke (0-1) and Colm Roche were outstanding in the absence of the injured Colm Boyle. Davitts midfielders Ronan McNamara (0-1) and Paul Carey (0-1) had the upperhand for most of the game, both working tirelessly for the team. Wing forwards Fergal McGrath (0-1) and Keith Prendergast ran themselves into the ground and centre half forward Keith Glynn (0-2) would have been most observers choice as man of the match. Michael Conroy (0-4), the team captain (pictured left), led by example and Aidan McTigue (0-1) and David McDonagh (0-1) completed a very dangerous full forwardline. Substitutes Pat Coyne, Carlos O Gara and Liam Kearns (0-1) all played their parts in this sweet victory.