LMS Week… We have joint winners 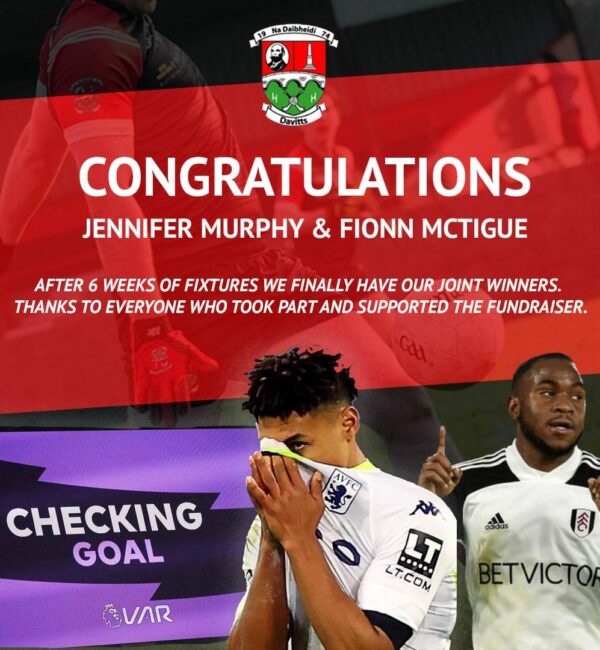 Davitts GAA Last Man Standing Competition has concluded.
We are delighted to announce that there has been 2 lucky joint winners of our inaugural Last Man Standing Competition.
In a disastrous last Gameweek, all 11 contestants failed to make a winning selection. With one of our closest neighbours, Galway & Milltown’s Brendan Donnelly only losing out to, what some people consider (especially Liam Kearns!) a very dubious VAR given penalty against Liverpool in added time, which ultimately cost him the title & the jackpot.
As all 11 Contestants lost out on Gameweek 6, this meant it went to the tiebreak of whose selections had most goals scored. 2 people were joint on 16 Goals as they had the same picks for each of the first 6 rounds. Manchester United, Liverpool, Tottenham Hotspur, Chelsea, Everton & Leicester.
The first was one of Davitts own very young rising stars Fionn McTigue, who knows his soccer as well as his Gaelic it seems.
The second was Jennifer Murphy, the better half of Davitts Senior Team member John Huane. John claims to have helped with Jennifer’s picks all along but his very early exit in Gameweek 1 puts that theory to bed.
We have decided to up the Jackpot to €400 and give both winners €200 each. We will be in contact with the winners very shortly.
Again thank you all for your generous support which sees our Club gym fitted out with new equipment, making it one of the most impressive facilities in the county and further afield.
Davitts Club would also like to compliment and thank the players who worked so hard in organising this highly successful fundraiser in such a difficult year.
And finally, with the large number of calls for “Buy-Back Ins” after the calamitous Gameweek 1, we may launch another competition in the new year as several egos were cruelly shattered so early in this one
ENTER NOW