Minors are South B Champions 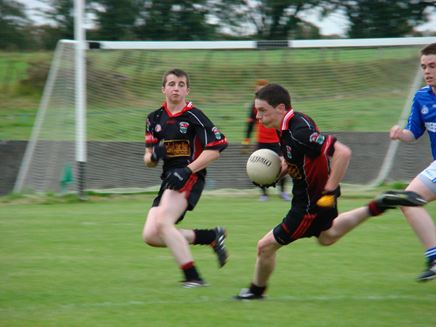 Davitts minor team captured the South Mayo B title with a great 1-10 to 0-10 victory over Ballinrobe, in Ballinrobe on Friday evening. Davitts were level at halftime, 0-5 each, with Liam Noone (2), Darren Connolly, Clive Hennigan and Tommy Waldron the scorers but can thank goalkeeper David Mitchell who magnificently saved a Ballinrobe penalty in the fifteenth minute, for keeping them in touch with the homeside.

The Davitts selectors made a few key positional switches in the second half, moving Mark Ronayne and Andrew Peters to midfield, Clive Hennigan to centre half forward and William Freeley to centre half back, all of which proved very effective. Freeley gave an exhibition of defending and Mark Ronayne drove his colleagues forward and from one of those attacks, Davitts got the game’s crucial score midway through the second half. Andrew Peters went on a mazy run, beating several defenders before passing to Tommy Waldron who dummied the keeper before blasting to the net to the delight of the large crowd of Davitts supporters. Ballinrobe threw everything they had at Davitts in the closing minutes of the second half but could not find the goal they needed thanks to the hard work of all the Davitts players.

David Mitchell was a rock solid goalkeeper and in front of him Brian Clarke and Gerard McWalter defended calmly. Cathal Higgins and Jason Connolly did well on the wings and William Freeley had an outstanding second half when moved to the backline. Mark Ronayne played a captains part throughout with Sean Waldron working hard until he was replaced by Gearoid Lyons, who won some vital ball, in the second half. Up front Andrew Peters and Clive Hennigan got better as the game went on and Tommy Waldron, Darren Connolly and Liam Noone were lively all through. Well done to the astute management team of Liam Nyland, Paul Carey, John Waldron and Tom ‘Dandy’ Kearns.