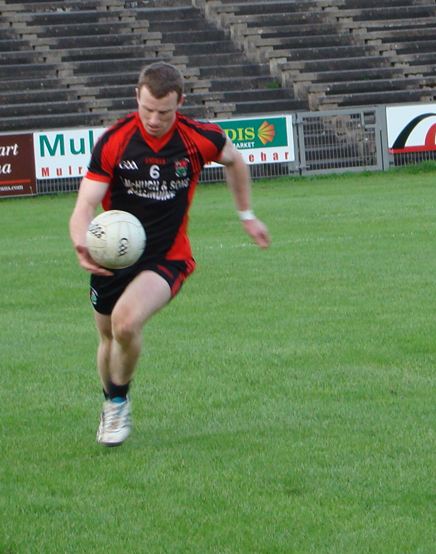 Boyler, current star defender on the Mayo senior team, is an inspirational player for Davitts. A former Mayo minor captain, Colm won an All-Ireland U-21 winners medal in 2006. An aggressive, no nonsense and attacking defender now, he used to play most of his football in attack when he was younger. His competitive spirit is admirable and the affable Colm, as well as being a top player, is also a brilliant clubman and a great role model for the younger players in the club.

Very photogenic, he is regularly featured in the local and national papers due to his acrobatic antics on the pitch, thankfully other photos of Colm have not made the press (yet!). Boyler’s inter-county career has enjoyed resurgence since he moved into a house full of GAA legends last year. Household names like Conroy, McTigue, Nallen and Costello have all benefited from the advise they have received from housemate and sports psychologist Derry O Sullivan (equally photogenic!!!), who now doubles up as a motivator and dietician for Boyler, Michael Conroy and Aidan McTigue.