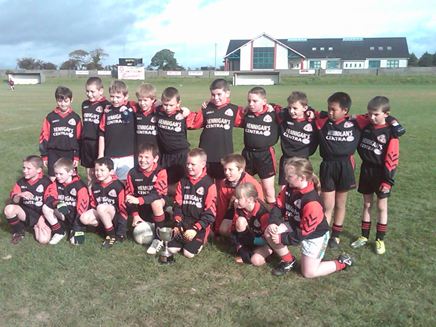 The U-10’s finished off the year in style by defeating Michael Glavy’s of Ballinlough by 4-7 to 1-5 in the Penny Cup final played in Ballindine on Sunday. The first half was a closely contested affair, with only 4 points separating the sides at half time on a scorline of 1-5 to 4 points in favour of Davitts. However Davitts pulled away in the second half with 3 goals in ten a blistering ten minute period.

On a day when every Davitts player was to the fore, the outstanding players for Davitts were Cian Naughtan, Niall Kearns, Colin Mulligan, Jordan Flanagan, Stephen Nyland and (last but by no means least) team Captain Dimitri Trench who is most certainly one to watch for the future.

The U-8’s were also in action on Sunday, playing Michael Glavy’s U-8’s and, not to be outdone, also defeated the Ballinlough side. Well done to all the boys and girls who participated on Sunday and lined out in the Black and Red of Davitts in 2010.