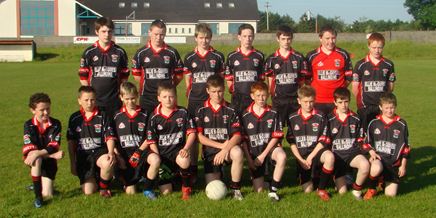 The u-14 team qualified for the County Div 3 league final with a hard earned victory over a gallant Ballinrobe side, in Ballindine on Wednesday. Davitts had to withstand a late rally from the visitors, which yielded 2-3 without reply, to win this semi final by 5-10 to 4-8.

The games outstanding player was Davitts forward Tommy Waldron who terrorised the Ballinrobe defence all evening, seeing off a number of opponents, and ending up with a personal tally of 4-3. He got great support up front from Matthew Trench, Michael Clarke, Liam Noone, Cathal Hennelly and lively sub Gerard Griffin. Team captain Donal Ronayne had a tremendous game at midfield along with Thomas Charles. Goalkeeper Michael Mangan effected some brilliant saves, while William Freeley was excellent in defence, with Padraig Mangan, Liam Connolly, Shane Cummins, Jonathon Fahy and sub Jack Rodgers also defending well.

Well done to the management team of Martin Kearns, Tommy Ronayne, Liam Griffin and Joe Mangan, who have put in a huge effort with this team.